Juvenilia - a leaf from my salad days 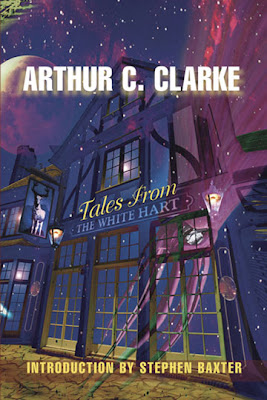 I'm not sparing my own blushes today, as here is "Cubic Capacity", a science fiction story I wrote when I was fifteen years old. It's a miracle it survived, buried at the bottom of a box of Conan and Solomon Kane books. Normally I'd throw something like this away, and reading it today I have to cringe at some (most) of the prose. Who was my literary role model - Isaac Asimov?

But instead of shoving it back in the box I'm gritting my teeth and putting it up here, because there is something interesting about it. It shows the early influence on my fantasy and SF tastes of series like Arthur C. Clarke's Tales from the White Hart and Pratt and deCamp's Tales from Gavagan's Bar. I didn't know it then, but those authors must have been inspired by Dunsany's Joseph Jorkens stories - and that particular blend of British whimsical fantasy is the very lifeblood of Mirabilis.

(I will say one word of apologia for my fifteen-year-old self: his youthful opinion of politicians has surely been confirmed by the actions of Blair and Bush in initiating the second Gulf War. I wouldn't trust guys like that to run a borough council, let alone talk to folks from another star...)

"You're always going on about the crazy stuff the manufacturers are turning out these days," called out Marty across the lab. "Well, take a look at this. Free sample, came this morning."

I caught the measuring cylinder he'd tossed over to me just in time to stop it from careening into the apparatus I'd laid out for an organic synthesis later that afternoon.

"What's the matter with it?" I said, turning it over in my hands. "Looks exactly like the dozens of others we've got in the cupboard. Only it isn't broken."

"It won't break." He came over to where I was standing and took the cylinder. "What do you think it's made of? Glass?"

He hurled the measuring cylinder at the floor. Instead of shattering, it hit with an almost metallic twang and bounced, reverberating with a very low note which took the better part of a minute to die away. When I bent and picked it up, I could still feel ticklish vibrations in it.

"An unbreakable glass measuring cylinder that doubles as a tuning fork." I shrugged. "I don't see what's so special."

"Unbreakable glass! I dropped the damned thing down three flights of stairs. Not a scratch. A kind of glass that special gets a mention in the journals."

"Maybe it's some sort of plastic." I set it down on the bench. "Look, Marty, I wouldn't call that manufacturer crazy; he stands to make a tidy profit. In two years, of course, he'll have destroyed the market for re¬placements, but by that time I don't think he'll care."

With an insufferable smirk, he said: "That wasn't what I meant. Take a look at the graduations on the side."

I did, and frowned, then sighed in resignation. “Good God. What cretins these mortals be."
Because the graduations were marked logarithmically.

Marty and I stared for a bit at the cylinder, and then at one another, and then we began to laugh that breed of frustrated laughter born of long dealing with incompetents.

"What on Earth," mused Marty after a moment's pause, “do you imagine might have motivated the powers-that-be at Gremlin Control that inspired them to come up with this little gem?"

Maybe I should explain – though maybe, if you're a chemist too, I don't have to. Gremlin Control is the result of our speculation as to who it is dreams up the little things (like bunsens with the air intake welded shut, or water heaters with only two effective settings: fast freeze and rapid boil) that render so delightful the otherwise monotonous tedium of work in a laboratory.

According to the markings, the cylinder would hold ten to the twenty-four c.c.s when full. I'm a skeptic. As a kid, I used to think Galileo had faked that Tower of Pisa experiment. But I put the measuring cylinder under the tap anyway. After all, the logarithmic marking didn't prevent me from measuring out volumes accurately, since every power of ten was stressed on the side just as each c.c. would be on a regular cylinder. That was the only thing that was wrong.

But no it wasn't. Now I saw the cylinder wasn't filling up. The tap kept running but the water level hardly moved.

Marty reckoned they had put two gremlins in the one cylinder, with one letting out the water through a hole in the bottom. That wasn't right, though; there was no hole, and the cylinder was becoming heavier in my hand. After a minute I put it down in the sink, with the tap still running.

"It's filling slowly," Marty said as he peered over my shoulder at it. "Funny thing, that. Let's see."

He reached out and began to pick up the measuring cylinder. Then he put it down again, quickly.

"Sam— that thing must weigh at least two kilos!"

“Makes sense, I guess…” I murmured, half stunned. “It’d be, what, twenty-five c.c.s a second for about eighty seconds. Yeah, two kilograms. Makes sense."

"Not to me, it doesn't. Where has that cylinder got room for two litres inside it?"

I bent nearer. Well, look at the level of the water. Just over ten to the three. Makes sense."

"Sam, don't say that again. But ... hmm, you can see now why it would have to be so strong. Ten to the twenty-four c.c.s would exert quite a pressure."

I had to laugh at that. "You're not seriously suggesting anyone could use it to measure that much water. It would take longer than the lifetime of the Universe to fill up, unless you had a very special technique for pouring in the water."

"It would, wouldn't it," concurred Marty. "'Why make it to hold that much, then? And who's going to use a measuring cylinder like this, anyway?"

I thought for a moment. “What was the name of the firm that supplied it?"

"Altair Labware. Never heard of them before. Odd name, though. Now, you don't think..."

I saw where his train of thought was going and jumped it. "Don't get fantastic about this. It has to be terrestrial. It uses c.c.s, for one thing, and logs to base ten. And the fact that it's built to hold far more than anyone's ever going to be able to put into it must mean that the people who are going to be using it are used to conventional measuring cylinders and they don't want to change to some other design with a more reasonable capacity. Was this the only one of its kind in the box?"

"Yes." Marty took out his spatula and began to suck it. One day he's going to do that while it still has part of his last experiment on the end. "Listen, Sam— and don't say I'm being fantastic, because after seeing this measuring cylinder, the word has lost all meaning! Suppose this is an import from Altair, built there for a foreign market. Earth."

"Where is their market, then? And why should they be making ordinary lab equipment as well?"

“That would be a cover.” He leaned forward over the bench, warming to the subject. "The market would have to be our top scientists. Scientists get into communication with Altair, they're not going to tell the politicians, are they? Politicians aren’t even competent to handle international affairs, much less interstellar. What they would do, of course, would be to start importing Altair technology – and that would require new types of lab equipment. I guess people like you and me aren't high enough up in the pecking order to have been told. Or maybe they reckoned industrial scientists couldn't be relied on to keep quiet about it."

"And are we going to keep quiet about it?"

"Sure!" Marty looked self-righteously shocked. "If it leaked, how long do you think it would be before some bright military spark got the idea of shipping a few dozen H-bombs back to Altair?"

"Tell me, Marty, what is it that gives you such a rosy and optimistic view of your own species?"

He grinned. "My lifelong interest in history. I'll write a letter here and now to the managing director of Altair Labware – has he got green skin and bug eyes, do you suppose? – telling him about the mix-up. With any luck he'll keep us supplied with free apparatus for months." He turned at the door. "And turn that tap off before the measuring cylinder goes clean through the sink.”

A week later, a van from Altair Labware arrived and two uniformed delivery men hauled out a crate which seemed almost to float on the little, castor-like attachments under it. We hurried down from the lab. Before they drove off, one of the men handed Marty a note. It was in reply to his letter:

'Dear Sir: Please allow me to apologize for the error in sending you one of our logarithmic measuring cylinders, and to thank you for returning same. I regret sincerely any inconvenience to your work that this mistake may have caused. I am taking the liberty of sending you a crate of normal measuring cylinders in the hope that you will find them useful. Please feel free to write again. — Harold T. Marx, Managing Director/Altair Labware.'

I removed them carefully there and then and scattered the chips of polystyrene packing material. Then I picked at the corners of the cardboard partition beneath and lifted it out to get at the next layer.

There, arranged in no particular order, lay one hundred logarithmic measuring cylinders…
Posted by Dave Morris on Saturday, August 21, 2010