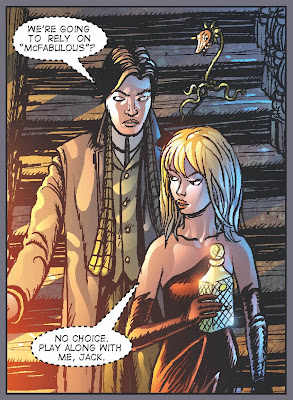 Once a year, as the nights draw in, aspiring writers bolt the door, disconnect the phone, and buckle down to hammer out a 50,000 word novel in thirty days. That's NaNoWriMo and if it sounds like fun, (a) seek help and (b) don't worry, because that doesn't start for another three weeks. Ah, but in the meantime, what to do with October? Well, ComicMix has declared this to be National Graphic Novel Writing Month and they've got a lot of great tips for writing graphic novels to get you started.

NaGraNoWriMo may not trip off the tongue quite as readily as its prose writing equivalent, but the goal of completing the script for a 48-page OGN in thirty-one days sounds a lot less frantic. Almost leisurely, in fact - just so long as you already have the concept and the plot outline in mind. 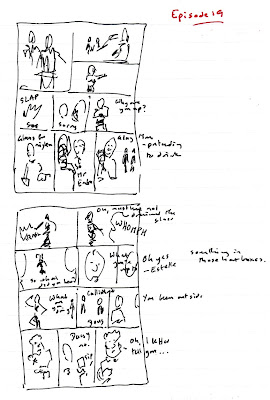 I was going to sound off about the commonly held assumption that writing is a breeze and that comics writers in particular have an easy life. They just have to "add the words", after all - how long can that take? Well, I figure on writing one 25-page episode of Mirabilis in a month. I could speed that up, but I don't think it would do much for the quality. Graphic novels aren't quite the same as monthly or weekly comics. You buy a graphic novel, you expect to have it on your shelf for years. At least, I do. And if you collect something like Hellboy or Northlanders or Scalped, you're probably hanging on to those too. But I'll bet you Mignola, Brian Wood, Jason Aaron and co are pouring most of their time, energy and soul into those books. Contrast that with the majority of comics, which are written fast and intended to be disposable.

Thing is, you're not supposed to be spending October writing two throwaway comic books. NaGraNoWriMo is about writing one 48-page graphic novel. A keeper. Now that's a task. But you know what? You can do it. I'll be putting up some tips through the rest of the month, and to start off here's my process for writing an episode of Mirabilis.

I begin with very rough drawings like the ones above. I don't know if you could even call them thumbnails. They tend to get drawn on scraps of paper while I'm eating dinner, or out for a walk. No used envelope goes to waste in our house. There's nothing like a script at this stage. The story comes to me visually first, maybe with single lines of dialogue that I'll write alongside the thumbnails. 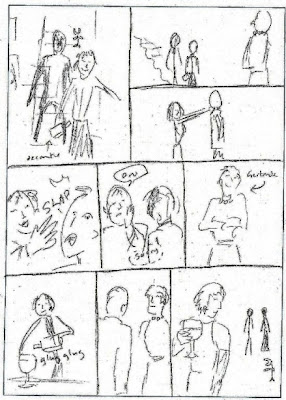 So then the next stage is to write all the dialogue, along with any scene descriptions I think Leo and Nikos are going to need. For the first panel on the page above, for instance, I had:

Estelle descending the stairs, smiling for Gertrude’s benefit as she whispers out of the corner of her mouth. Jack whispering urgently as he comes down just behind her.

The Venus fly-trap is also coming down (its little roots barely long enough to manage each step) but looking back the way McNab is going.

ESTELLE (whisper)
No choice. Play along with me, Jack.

I guess it's a little like the "Marvel Method" in that the process is story synopsis followed by layouts followed by script, the only difference being that it's me doing all those stages. The artists still haven't seen it at this stage; in fact Leo is typically pencilling twenty pages or so back from this episode, and Nikos will be coloring ten or fifteen pages back from that.

Then I refine the thumbnails into slightly less scrappy layout drawings for Leo to work from, as you can see here. At this stage I keep copies of Jennifer Van Sijll's Cinematic Storytelling and Steven D Katz's Film Directing Shot by Shot close at hand. I have in fact duplicate copies of these books as I tend to walk from room to room while planning out a sequence of panels and I need to be able to pounce on some expert advice at any moment! 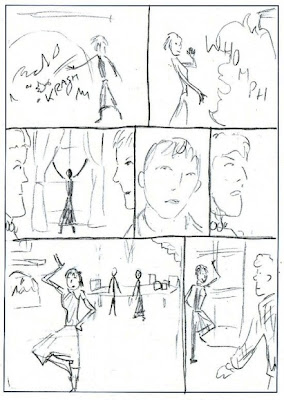 I also make any changes at this stage to fit the story to page length. I like to work out a 25-page episode in 5- or 6-page acts, the aim being to hit a major plot point at the end of each act . In this case, you can see that I decided I was squeezing too many panels onto page three, so I shunted that final tier onto the next page. That made more sense in story terms too, because it was the start of a conversation between Dougy and the villain that marked where the scene started to go downhill for the heroes, and fast.

Next the script for the episode goes off to Leo - which is usually an excuse for me to go and spend a few days at his place waaaay out in the backwoods so we can talk through the scenes, think a little about what's coming up in the next episode, and watch a few movies that will help inspire us. For this episode it was The Fearless Vampire Killers, Murder on the Orient Express and Howl's Moving Castle. Beer is usually drunk also. For when we need to get very creative, Leo keeps a bottle of Siberian-temperature vodka in the freezer in one of his outbuildings. 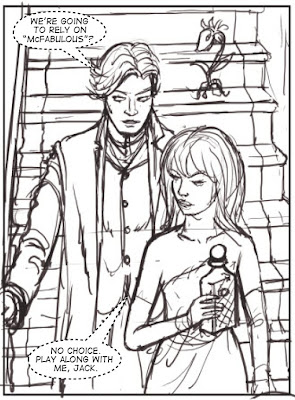 After the pencils stage, I might still be polishing the dialogue but obviously nothing changes in the story itself. In very rare cases we might see the need to change a panel, but usually there are just minor changes before Leo inks the episode and sends it off to Mike Toris, who does the flatting, and Nikos. We keep an "Art & Color Notes" doc online between the four of us that we continually update as any potential problems are flagged and dealt with.

Over on the Mirabilis blog, you can see the whole process laid out in detail for an entire 5-page act - we used to call those "episodes" back when we were running every week in The DFC. 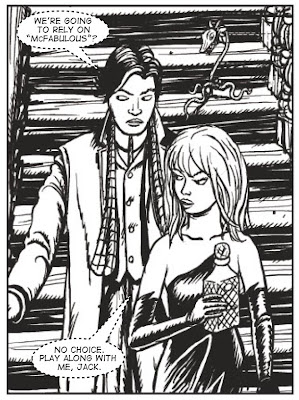