From Mytek the Mighty to the TARDIS control room

I was delighted and honoured to be invited to appear at CRoM Con Europe, the convention for comics fans and SF/fantasy geeks. Many thanks to Pops Van Sant, our esteemed host, and Glenn B Fleming, UK comics powerhouse, for including me. I got to hold forth about Mirabilis for a bit, describe my visit to the Doctor Who studios back in the Hartnell era, and as an added bonus I got to meet the guys from the Earth Station One podcast. Their back catalogue of episodes will be the soundtrack to my country walks well into the spring.
At one point we got to talking about Wrath of the Gods, a fabulously scary '60s comic strip set in the mythic age of Greece. It was illustrated by the (also mythic) Ron Embleton, of course, not "Ron Pemberton" as I burbled during the podcast. (I'd been chatting about Inside Number 9 recently; that's the only excuse I've got.)
If you want to skip, I come in after about three and half hours, but listen to the whole thing (there's a part two as well) because there are so many fascinating people with stories to tell and wisdom to impart. Talking of which, here's the time Glenn met Jack "King" Kirby:


And if you've just joined us: 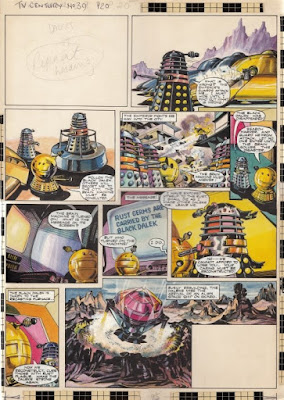 Terry Nation said he didn't like other Doctor Who writers using his creations because they couldn't get the Daleks' psychology right. He had a point. Certainly the Daleks have been increasingly badly handled in the 21st century version of the series. I think modern writers are all suckled on character arcs and rubber ducky motivational cues. Screenwriting doctrine teaches them to wrangle stories into those familiar shapes, but they aren't taught to stretch their imaginations out of the box so as to dream up really strange and original fantasies. Give them an alien menace and they want to portray it in soap opera terms -- were they abused? what's their character diamond? how can I make them more human?
Ugh to all that. The reason the post-Nation Dalek stories kept featuring Davros (who was good for just one story) was that writers said they could give him a lot of dialogue, whereas the Daleks' own monotonous voices meant their dialogue had to be terse. Well, less is more and vice versa. To take an example from another show, as soon as you have a Borg queen spouting theatrically villainous dialogue like Ming the Merciless, the Borg are no longer the Other and you have to start from scratch to create that weirdness and menace. Or (attention, writers) you could just not cock them up to begin with.
Anyway, back to our would-be overlords from Skaro. For two years The Daleks was a strip on the back of the weekly UK comic TV Century 21. There's the first surprise. Only two years? I remember it as a major part of my childhood but the fact is (like the Silver Age heyday of Marvel Comics that same decade) it came and went in a blink. Now those 104 strips have been collected in book form, which you might be able to get here or here. Just not anywhere convenient like Amazon.
Quite apart from the stories, which are gems of compressed comics writing by Alan Fennell and David Whitaker, the background material about the strips is fascinating. As a child I never knew the artists’ names, but I remembered the first one (Richard Jennings) as being quite sloppy in the way he drew Daleks, which for speed he just did as round bullet-shapes. He also drew the strips in the first two Dalek annuals.
Ron Turner took over after a year. His work was more stylish, and he put more effort into getting the Daleks’ shape right, but I don’t think the stories were as good later on. And because his artwork was executed with such technical precision it was less engaging than Jennings's scrappier panels. There's a lesson there for comics artists today. 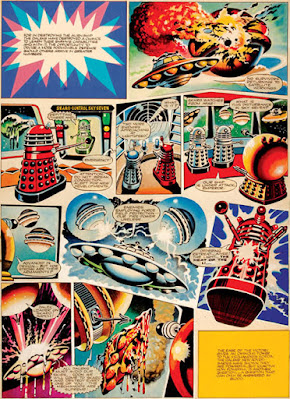 Why did Jennings leave the strip? I found the answer on the ever-reliable Bear Alley:

"[Jennings] spent a year drawing The Daleks for the back page of TV Century 21 in 1965 but drifted away from comics. 'For 18 months I worked as a long-distance lorry driver. Not very exciting but I was broke! I took my ancient jeep up to the Yorkshire Dales where I travelled around painting pub signs and portraits.'" 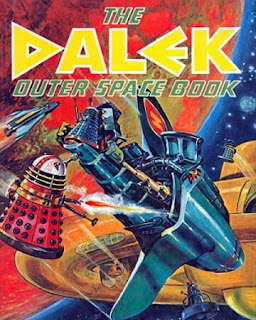 And that was when there were a lot of comics selling in the hundreds of thousands of copies every week. How much more impossible it is to make a living as an artist today. To think of a talented creative craftsman reduced to driving a lorry because it wasn't possible for him to actually get a decent wage for his work. I'd say it makes me weep but mainly it just makes me furious.
Still, those are old battles lost long ago. Back to the present day: the collection's editor, Marcus Hearn, theorizes that the end of the strip runs straight into the TV/movie storyline Daleks' Invasion Earth. But that’s set in 2150 AD, whereas the human race in the TV21 strip are clearly much more advanced, with FTL spaceships, which implies that it leads into the events of The Dalek Book and The Dalek World, which are set in the 25th century. (Since that’s the Daleks’ first contact with humanity, they must use their later discovery of time travel to conquer Earth in 2150, presumably to prevent their defeat at the end of The Dalek Book.)
Posted by Dave Morris on Monday, January 11, 2021 8 comments: