Justice from on high 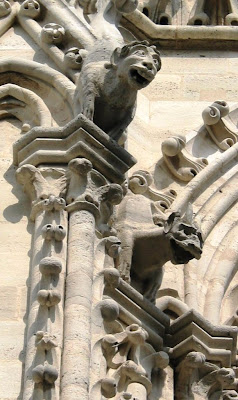 With news today of a Gigeresque alien gargoyle on Paisley Abbey, this seems like a good excuse to feature another letter to the Royal Mythological Society...

If you were to visit our most charming town, you would delight in the beautiful and historic church, much of the exterior structure of which dates from the 11th century. One of the features added in the 12th century were the many decorative gargoyles, each with its own personality stamped very clearly on faces of jocular menace.

Of late, the gargoyles have taken their traditional duty perhaps too much to heart. Charged with scaring away the ungodly from our church precincts, they first took to hounding out the bats that were accustomed to roost in the tower. My bell ringers were glad of this, as they often complained of the bats’ droppings, but I felt the departure of the bats robbed the town of some of its character at dusk.

More extreme measures were to come. When a young couple began stepping out in secret against their parents’ wishes, the gargoyles first chased them from the church and later began to swoop on them whenever they went courting, flinging pebbles and even bits of bone from the churchyard down on their heads. The poor suitor has entirely given up his love and now spends his evenings at cider and skittles.

And then—and this most intolerable—the gargoyles began to persecute poor Madame Cloville, who at eighty-two is the town’s oldest resident. I will break the seal of the confessional to tell you, good sirs, that this honest woman has committed no wrong save only when she was a schoolgirl, no more than nine years of age, and having broken a neighbour’s window she allowed another child to take the blame. Yet for that peccadillo over seven decades past, the gargoyles break her windows, steal her vegetables, and pelt her with dung. So unfortunate!

I would be loath to banish the gargoyles, as they are a venerable part of the church’s history, but pray tell me, sirs: whatever can be done to rein in the excesses of these zealous creatures?

Prof Bromfield replies: A firm hand is what’s needed. Climb up there and biff them on the nose with a mallet. And while you’re about it, give them that sermon from the gospel of St John about casting the first stone.

Dr Clattercut: Perhaps it would better to avoid any mention of throwing stones, as the gargoyles haven’t shown any reluctance in that regard up till now. I suggest having masonry pins applied to fix them to the church walls. Then, like a fierce dog on a stout chain, they can make as much noise as they please but no one need fear the bite.