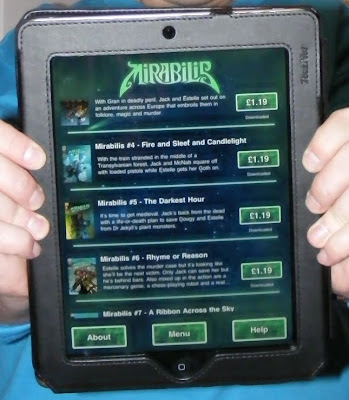 I'll be doing a complete post about this as soon as we go live - which is a matter of weeks away now. But I just had to share this with you because I've been playing the ad hoc build of the Mirabilis app and it really is a dream. Lush magic lantern colors, razor-sharp graphics, and an interface that's as stylish and smooth as an Irish coffee poured by George Clooney. If you're used to struggling with existing comic reader apps, you're going to be blown away by what our resident iOS wizard has conjured up.

Don't wait. Really, you should go direct to your nearest Apple retail store (look here for store locators: Apple in the UK and Apple in the US), buy yourself an iPad for Christmas, and you will then be able to get the reader app and the first chapter of Mirabilis free, with the other chapters available via our nifty in-app storefront. Mirabilis on iPad is our way of telling you that the Year of Wonders has arrived. And we have a lot more incredible news coming up, so don't go away.
Posted by Dave Morris on Tuesday, November 30, 2010 2 comments:

Comic books online, on the stands, and in the App Store 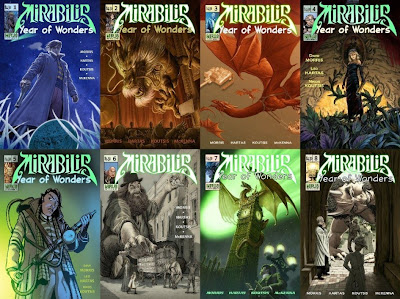 In the run-up to last Christmas, I posted a bunch of mock-up comic book covers - y'know, just for fun. The covers here are a little different. These are eight full-size, full-color comic books that will be on sale in the USA early next year - the first wave of a 32-issue run comprising the whole of the Jack and Estelle story. (But not necessarily the whole of Mirabilis: Year of Wonders, as we have plenty of other plotlines up our sleeves.)

Those are guaranteed to be worth waiting for as, along with the story itself, you'll get the RMS letters columns and a cornucopia of wondrous paintings by Martin. But the good news is, you don't have to wait. The whole Winter season will be available in trade paperback (two volumes) in just a few weeks. That's 224 pages of thrills and spills as only Leo and Nikos can serve it up. Look for those on Amazon and Barnes & Noble.

That's still not the really exciting news, though. Because the Mirabilis app is on course for a December release and you really need to buy, borrow or steal yourself an iPad right now. Thing of beauty though the iPad is, I honestly haven't seen anything on it to compare to the knock-down gorgeous graphics of Mirabilis. It fairly crackles with luminously sharp empyrean energy. Okay, don't actually resort to stealing. But do anything and everything else to make sure you have an iPad to hand on Christmas Eve as you will not want to miss the opening salvo in the Year of Mirabilis. Did I mention that the opening chapter is absolutely free?
Posted by Dave Morris on Thursday, November 18, 2010 6 comments:

DriveThruComics latest - and other big news 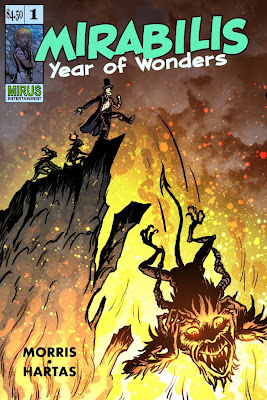 You've seen this cover before. The big difference is that it's about to be the first in an eight-issue run of real comic books. I'm talking about regular, tried-and-true printed comic books now, not e-comics - though we are also on course to have the whole of the Mirabilis: Winter graphic novel on iPad in time for Christmas.

The iPad issues will probably retail around $1.99 each, but if you haven't gone totally digital yet then you may prefer to buy the physical comic books on IndyPlanet. Those will be tagged around $4.50 each, meaning you can read the whole 200-page graphic novel for $36. At that price you have to bring your own Mylar bags. Issue 1 should be on sale in a few days.

On the other hand, if you've never been bitten by the comics collecting bug then you could hold out for the graphic novel editions. We anticipate the trade paperbacks (two comic-sized volumes) going on sale in the USA in December. Those will retail at $19.99 each. But if you live in the UK, the real treat will be massive European-album sized hardback editions due out early next year. Save up your book tokens as those should be the most gorgeous incarnation of all Mirabilis's many forms.

Oh, and we also have breaking news of serialization of the episodes in India. This has got me and Leo beside ourselves with excitement because Jack will be heading off from Britain to India in the Spring GN, so it'll be great to think of Mirabilis becoming another bridge between those two great cultures. More on that as the details firm up.

2011 is guaranteed to provide you with a format of your choice for reading Mirabilis - whether it's online, as an app, in paperback or hardback, or in the form of regular comic books. As a special offer to get you started, we've put Mirabilis #1 up online and you can get it for free on DriveThruComics. Even if you've read this opening issue already, please hit the link and give us a review as we're collecting stars.
Posted by Dave Morris on Thursday, November 04, 2010 3 comments: