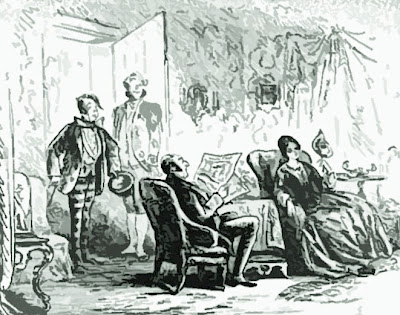 When to use direct speech, and when to use reported? We tend to see the former more these days because so many novel-writers take their model from movies and television. But it would be a long book that could never draw breath to say, "He told her all about it," or words to that effect.

Brevity is not, of course, the main reason for using reported speech. A narrator character is less likely to tell us word for word what he or she said. Reported speech can help to convey states of mind like excitement or passion (precise wording can often come across as banal, even if - especially if - realistic). If used selectively, it can differentiate a character from the others in a scene.

It can also be used for comic effect, often in parallel with serving one or more of those other purposes. Notice how, in this scene from Bleak House, Dickens contrasts direct and reported speech to give us a sense of the nervously wittering Mr Guppy and the (apparently) cool, calm and collected Lady Dedlock.

He comes in. Holding the letter in her hand, which she has taken from the floor, she tries to collect her thoughts. In the eyes of Mr. Guppy she is the same Lady Dedlock, holding the same prepared, proud, chilling state.

"Your Ladyship may not be at first disposed to excuse this visit from one who has never been welcome to your Ladyship"—which he don't complain of, for he is bound to confess that there never has been any particular reason on the face of things why he should be—"but I hope when I mention my motives to your Ladyship you will not find fault with me," says Mr. Guppy.

"Thank your Ladyship. I ought first to explain to your Ladyship," Mr. Guppy sits on the edge of a chair and puts his hat on the carpet at his feet, "that Miss Summerson, whose image, as I formerly mentioned to your Ladyship, was at one period of my life imprinted on my art until erased by circumstances over which I had no control, communicated to me, after I had the pleasure of waiting on your Ladyship last, that she particularly wished me to take no steps whatever in any manner at all relating to her. And Miss Summerson's wishes being to me a law (except as connected with circumstances over which I have no control), I consequently never expected to have the distinguished honour of waiting on your Ladyship again."

And yet he is here now, Lady Dedlock moodily reminds him.

"And yet I am here now," Mr. Guppy admits. "My object being to communicate to your Ladyship, under the seal of confidence, why I am here."

He cannot do so, she tells him, too plainly or too briefly.

"Nor can I," Mr. Guppy returns with a sense of injury upon him, "too particularly request your Ladyship to take particular notice that it's no personal affair of mine that brings me here. I have no interested views of my own to serve in coming here. If it was not for my promise to Miss Summerson and my keeping of it sacred—I, in point of fact, shouldn't have darkened these doors again, but should have seen 'em further first."

Mr. Guppy considers this a favourable moment for sticking up his hair with both hands.

"Your Ladyship will remember when I mention it that the last time I was here I run against a party very eminent in our profession and whose loss we all deplore. That party certainly did from that time apply himself to cutting in against me in a way that I will call sharp practice, and did make it, at every turn and point, extremely difficult for me to be sure that I hadn't inadvertently led up to something contrary to Miss Summerson's wishes. Self-praise is no recommendation, but I may say for myself that I am not so bad a man of business neither."

Lady Dedlock looks at him in stern inquiry. Mr. Guppy immediately withdraws his eyes from her face and looks anywhere else.

"Indeed, it has been made so hard," he goes on, "to have any idea what that party was up to in combination with others that until the loss which we all deplore I was gravelled—an expression which your Ladyship, moving in the higher circles, will be so good as to consider tantamount to knocked over. Small likewise—a name by which I refer to another party, a friend of mine that your Ladyship is not acquainted with—got to be so close and double-faced that at times it wasn't easy to keep one's hands off his ed. However, what with the exertion of my humble abilities, and what with the help of a mutual friend by the name of Mr. Tony Weevle (who is of a high aristocratic turn and has your Ladyship's portrait always hanging up in his room), I have now reasons for an apprehension as to which I come to put your Ladyship upon your guard. First, will your Ladyship allow me to ask you whether you have had any strange visitors this morning? I don't mean fashionable visitors, but such visitors, for instance, as Miss Barbary's old servant, or as a person without the use of his lower extremities, carried upstairs similarly to a guy?"

"Then I assure your Ladyship that such visitors have been here and have been received here. Because I saw them at the door, and waited at the corner of the square till they came out, and took half an hour's turn afterwards to avoid them."

"What have I to do with that, or what have you? I do not understand you. What do you mean?"

"Your Ladyship, I come to put you on your guard. There may be no occasion for it. Very well. Then I have only done my best to keep my promise to Miss Summerson. I strongly suspect (from what Small has dropped, and from what we have corkscrewed out of him) that those letters I was to have brought to your Ladyship were not destroyed when I supposed they were. That if there was anything to be blown upon, it is blown upon. That the visitors I have alluded to have been here this morning to make money of it. And that the money is made, or making."

Mr. Guppy picks up his hat and rises.

"Your Ladyship, you know best whether there's anything in what I say or whether there's nothing. Something or nothing, I have acted up to Miss Summerson's wishes in letting things alone and in undoing what I had begun to do, as far as possible; that's sufficient for me. In case I should be taking a liberty in putting your Ladyship on your guard when there's no necessity for it, you will endeavour, I should hope, to outlive my presumption, and I shall endeavour to outlive your disapprobation. I now take my farewell of your Ladyship, and assure you that there's no danger of your ever being waited on by me again."

Notice the impact, after we've had only Lady Dedlock's reported speech through most of the interview, of that dramatic and sudden "No!" Those are the touches that mark out Dickens as a master of his craft.
Posted by Dave Morris on Saturday, January 26, 2013 No comments: