The second Mirabilis book was due to go on sale in May, but we've just learned that the entire print run is currently in Germany. The shipment started off in Bosnia and Herzegovina, where the publishers are based, on February 20th, so the books are approaching Britain at a rate of about four miles a day. We're hoping they'll speed up now. If not, expect them in time for Christmas.

In the meantime, here's an online preview of Book 2 courtesy of Myebook, or click on the BookBuzzr widget above. You can still order the gorgeous hardcover edition of Book 1 here and you can pre-order Book 2 here. But, if you can't wait, the paperback edition is available here.
Posted by Dave Morris on Wednesday, July 11, 2012 2 comments:

"Lost in an immensely abundant brain" 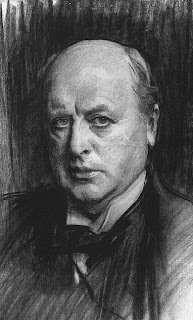 I've recently been reading some Henry James, which is not necessarily a good idea last thing at night. My wife used to occasionally put herself off to sleep with a sudoku, until she noticed how hard it was to wake up in the mornings, an effect we called "a sudoku hangover". Well, if arithmetical puzzles can overheat the brain and make it unfit for placid slumber, just try Mr James's baroque sentences. I've got a Physics degree, for heaven's sake. I can compose something like my interactive Frankenstein book without the aid of a flowchart, just banging the logic mark-up straight down on the page as I write. So, not entirely thick, okay. But Henry James's prose can entangle my brain like a problem in vector calculus. Parsing those endlessly nested grammatical pathways is only slightly easier than punching out of a black hole's event horizon. Restful sleep? It's all I can do, after putting the book on the bedside table, to keep my brain from melting through the pillow. H G Wells must have felt the same way; it's his quote that I used as the title.

This is not to say I don't admire James's work. I happen to prefer more populist authors like Dickens and Dostoyevsky - or Wells - where it's the story that engrosses you rather than the sentences. But I can appreciate his fine eye for character and social circumstance. That said, I was amused by this anecdote by Edith Wharton that reveals that James's great big bonce, whether processing fiction or the real world, left no room for simplicity:


It chanced however that Charles Cook, our faithful and skilful driver, was a born path-finder, while James's sense of direction was non-existent, or rather actively but always erroneously alert; and the consequences of his intervention were always bewildering and sometimes extremely fatiguing. The first time that my husband and I went to Lamb House by motor (coming from France) James, who had travelled to Folkestone by train to meet us, insisted on seating himself next to Cook on the plea that the roads across Romney Marsh formed such a tangle that only an old inhabitant could guide us to Rye. The suggestion resulted in our turning around and around in our tracks till long after dark, though Rye, con¬spicuous on its conical hill, was just ahead of us and Cook could easily have landed us there in time for tea.

Another year we had been motoring in the West Country, and on the way back were to spend a night at Malvern. As we approached (at the close of a dark rainy afternoon) I saw James growing restless, and was not surprised to hear him say: 'My dear, I once spent a summer at Malvern and know it very well; and as it is rather difficult to find the way to the hotel, it might be well if Edward were to change places with me and let me sit beside Cook.' My husband of course acceded (though with doubt in his heart) and, James having taken his place, we awaited the result. Malvern, if I am not mistaken, is encircled by a sort of upper boulevard, of the kind called in Italy a strada di circonvallazione, and for an hour we circled about above the outspread city while James vainly tried to remember which particular street led down most directly to our hotel. At each corner (literally) he stopped the motor, and we heard a muttering, first confident and then anguished. 'This—this, my dear Cook, yes ... this certainly is the right corner. But no; stay! A moment longer, please—in this light it's so difficult ... appearances are so misleading ... It may be ... yes! I think it is the next turn ... a little farther lend thy guiding hand . . . that is, drive on; but slowly, please, my dear Cook; very slowly!' And at the next corner the same agitated monologue would be repeated; till at length Cook, the mildest of men, interrupted gently: 'I guess any turn'll get us down into the town, Mr. James, and after that I can ask'—and late, hungry and exhausted we arrived at length at our destination, James still convinced that the next turn would have been the right one if only we had been more patient.

The most absurd of these episodes occurred on another rainy evening when James and I chanced to arrive at Windsor long after dark. We must have been driven by a strange chauffeur – perhaps Cook was on holiday; at any rate, having fallen into the lazy habit of trusting him to know the way, I found myself at a loss to direct his substitute to the King's Road. While I was hesitating, and peering out into the darkness, James spied an ancient doddering man who had stopped in the rain to gaze at us. "Wait a moment, my dear, I'll ask him where we are.” And, leaning out, he signalled to the spectator.

“My good man, if you’ll be good enough to come here, please; a little nearer… So…” and as the old man came up: “my friend, to put it to you in two words, this lady and I have just arrived here from Slough – that is to say, to be more strictly accurate, we have recently passed through Slough on our way here, having actually motored to Windsor from Rye, which was our point of departure; and the darkness having overtaken us, we should be much obliged if you would tell us where we now are in relation, say, to the High Street, which, as you of course know, leads to the castle, after leaving on the left hand the turn down to the railway station.”

I was not surprised to have this extraordinary appeal met by silence, and a dazed expression on the old wrinkled face at the window, nor to have James go on, “In short” (his invariable prelude to a fresh series of explanatory ramifications), “in short, my good man, what I want to put to you in a word is this: supposing we have already (as I have reason to think we have) driven past the turn down to the railway station (which in that case, by the way, would probably not have been on our left hand, but on our right) where are we now in relation to – ”
“Oh, please,” I interrupted, feeling myself utterly unable to sit through another parenthesis, “do ask him where the King’s Road is.”

“Ah – ? The King’s Road? Just so! Quite right! Can you, as a matter of fact, my good man, tell us where, in relation to our present position, the King’s Road exactly is?”

“Ye’re in it,” said the aged face at the window.