When logic and proportion have fallen sloppy dead


To properly appreciate just how disturbing Jefferson Airplane’s "White Rabbit" is, you need to burn all your furniture, daub luminous graffiti on the walls of your house, and crank up the hi-fi to a volume that could liquefy human bone. That’s the scene Michael Douglas comes home to in David Fincher’s The Game. His life is being taken to pieces and it’s going to take more than the King’s men to put it back together again.

What makes Grace Slick’s original version of the song so much more unsettling than most of the "White Rabbit" covers is the way she delivers it so plainly. The tone is hectoring, not haunting; fanatical, not febrile. And that’s what makes it powerful. The stark, shouty simplicity of the presentation. The whole nightmare otherworldliness is right there in the lyrics, and Ms Slick delivers them in a relentless martial rhythm that has its own unstoppable momentum. You are dropping down a rabbit hole and there's no parachute. Dressing it all up in a self-consciously “weird” melody would only weaken it.

Are there other examples of that in other media? There’s a superbly creepy one in The Fearless Vampire Killers. When Alfie Bass sits up on his bier there’s no showing-off in the photography. Polanski films it the scene as stark and shocking as a dream. It’s funny at the same time, of course, but that only makes it more unsettling.

Or how about the ghost stories of M R James? Unadorned prose and almost a humdrum narrative frame from which the supernatural pokes through like a mouse in the skirting board. I find that much more shuddery than Lovecraft’s florid prose, always so anxious to assure us this is all very, very frightening. Likewise, there are more scares in one minute of Let The Right One In than in all the last decade’s output of Hollywood horror movies, precisely because Tomas Alfredson plays it completely unplugged.

The best episode of Buffy the Vampire Slayer is “The Body” where any attempt to dress up the drama with eerie music and clever-clever direction would insulate us from the raw emotion. Instead, Joss Whedon strips that all away and we’re left with no cosy refuge such as the usual fictional wrapper would provide. Result: forty-four minutes of intense drama that leave you genuinely shaken.

Can you think of other examples from prose, movies, music or comics where simplicity delivers a punch that could not have been achieved through showmanship? 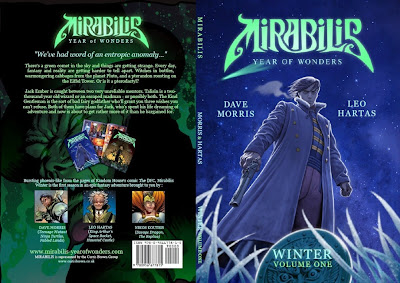 Okay, we've got a month of big news coming up and this is just the start of it. In a matter of weeks you'll be able to feast your eyes on the whole Winter season of Mirabilis in the form of two glorious full-color volumes. Each book is 112 pages and will be available on Amazon and Barnes & Noble for around $19.99 each (or £12.99 in Britain). When we have the hard release date and RRP we'll be announcing it here, along with the first look ever at the stupendous cover painting of Volume Two - really, it should be in the Guggenheim. Oh, and then there's the apps... Stay tuned!
Posted by Dave Morris on Tuesday, September 14, 2010 10 comments:

Forced landing among the gods 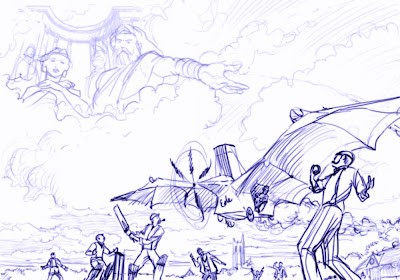 “Above the May Day celebrations in Worplesdon in Surrey, the clouds part and the halls of Olympus can be seen. Down flies an airplane to land on the village green. It’s the Wright brothers, believed lost several months earlier after disappearing into a thick fog off the coast of North Carolina.”

That’s how it began: a throwaway paragraph from a big brainstorming document that I did years ago, right after we first came up with the concept of Mirabilis. I put down hundreds of scraps of ideas as they came to me, figuring it was the best way to build up a picture of how fantasy flowed and ebbed through the year.

Each month had a little descriptive line. January: “Some rather queer things have been happening lately.” February: “Did I dream that, or did it really happen?” March: “It’s true; my cousin saw it with his own eyes.” April: “There are new things under the sun.” And so on to November ("Half sick of shadows") to the end.

Fast forward a while. It's 2008. Mirabilis is due to appear in The DFC and Random House have commissioned the Gazetteer for rather a tidy sum. So now Martin and I are working on ideas that would make the twelve full-color spreads that will form the épine dorsale of the Gazetteer – and later, we envisaged, comprise a rather nice Mirabilis calendar.

That first version we weren’t sure about for a couple of reasons. The flying machine was based on a real design by Clément Ader from the 1890s. In real life it didn’t fly, of course, but the green comet effect could change all that. Trouble is, it looks too science fictional, and people would think we were trying to do steampunk. The other problem is the placement of Zeus and Hera, who appear to be montaged in rather than directly interacting with the action. Martin and I mulled over it for days. He wrote:

“I showed it to Dave Carson, who knows about the Mirabilis concept, and he had no idea what we were trying to achieve in the picture, and found it confusing.” 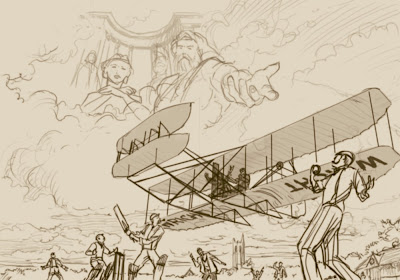 So, on to the second version. Now Martin has brought the gods into the picture by moving them across and having the line of Zeus’s arm connect with the action below. I wasn’t happy with the flying machine, though. It looked like a real historical Wright Brothers contraption. Snag is, authentic and all, at first glimpse you’d think it was flying backwards. Martin pointed out that was how it would really have flown. But it forces a double-take about the wrong thing. You want your viewer to be going, “Ooh, that plane has flown down to the village green from Olympus!” not, “Have they got that plane the wrong way round or something?”

“I think the machine we need to use is the Model A Flyer from 1907. It was the fourth machine they designed, the first to feature two seated occupants – a requirement to secure a US Army contract. It was the first to be 'mass' produced, not sure how many but they were also built in Europe – so the truly pioneering vibe of the first three Flyers is slightly lost. But it's the first design where we can show two occupants – except the brothers never flew together, at the request of their father to avoid a double tragedy.” 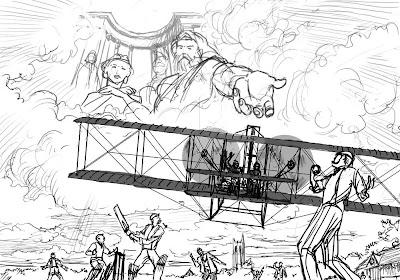 And that brings us to the third version. The line of action is much clearer now, and Martin suggested accentuating that by having the suggestion of a “vapor trail” down from Zeus’s hand. It’s also much more dramatic in the way the airplane is buzzing the cricketers. We discovered that Zeus’s many epithets included Phyxius, god of flight, so it’s reasonable that he might take an interest in Orville and Wilbur’s experiments. (He was also sometimes known as Terminalis, protector of boundaries, which explains why he would be observing a village cricket match.)

We were still not completely satisfied with the picture, and I suspect by this time that Martin was coming to the conclusion that it would work better if he chose what to illustrate, rather than have me foist impossibly complicated compositions on him!

In the end, the concept changed anyway. I felt that Worplesdon was getting enough coverage in Mirabilis (the Sidney Sime connection, you see) and we needed to show more episodes from around the world – specifically, from other parts of the Empire, to show the global transformation of the Edwardian era that Comet Meadowvane was causing. Hence the report to the Royal Mythological Society moved the whole thing over to India:

An extraordinary event took place during a recent cricket match between the royal court and the local British regiment. The court was 150 for 4 when a great rock slid like a cloud across the sky, and down from it came a buzzing machine made of wire, wood and brown paper.

The contraption landed in the middle of the pitch, driving two deep ruts right across from mid-wicket to the stumps despite the hardness of the ground at the time of year. I barely threw myself out of the way in time, after first giving the propeller a sound clout with my bat, whereupon a young fellow wearing a leather hat and goggles leapt out crying, “For Pete’s sake, mister, why’d you have to go do a thing like that?”

When my temper cooled a little, I discovered the two occupants of this aerial machine were brothers by the name of Wright. Having taken off from a field in North Carolina back in January, they flew into a storm and were forced to land on what they thought was Bermuda, but which turned out in fact to be the flying island of Laputa. The island was carried around the world by the trade winds, and by chance the brothers Wright had completed repairs on their vehicle and were ready to take off again just as they passed over our pitch.

The question is, would you say this occurrence is ground for abandoning the whole game, or did the court (as the umpires ruled) forfeit the match? We cannot resume play now because the monsoon has arrived.

Dr Clattercut replies: Please do not treat the brothers Wright too harshly, your royal highness. Americans don’t understand cricket and so they probably think they've done nothing worse than if they had disrupted a game of baseball.

Prof Bromfield: Yes, and in any case the harm is done. The umpires have the last word, no doubt about it. You’ll get nowhere arguing with them, any more than with the Fates.

Dr Clattercut: It is the Graeae, of course - the three “grey sisters” of Greek myth - who share but a single eye between them.