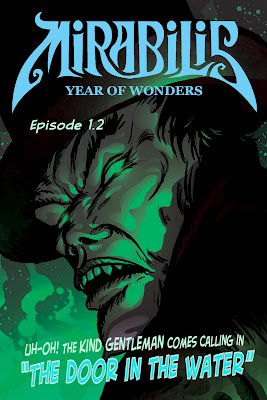 Following on from the preview of Mirabilis: Winter volume 2, here's news that should please anyone who found a Kindle under the Christmas tree. We've just re-released the Kindle mini-episodes collecting the first thirty pages of volume 1. If you're signed up for Amazon Prime you can borrow them anytime, but even if not you can grab the first two completely free tomorrow or Saturday.
Episode 1.1 is "Stung!" which first appeared in DFC #30 (the 2008 Christmas issue). Jack is about to face a duel to the death when he finds an ancient two-headed coin that's destined to change his life forever. Get "Stung!" from the Kindle Store US here and UK here.
Episode 1.2 is "The Door in the Water". Jack meets Gus for the first time - but it's in a dream, so maybe it doesn't count. And when he wakes up he goes witch-hunting, only it turns out the witch is the one with the killing jar. That's in the Kindle Store US here and UK here.
Episode 1.3, "The Wrong Side of Bedlam" sees Gus (that's Talisin of the Shining Brow to us) escaping from a padded cell, Jack trapped in a witch bottle, and the boffins of the Royal Mythological Society explaining what's in store now the green comet has reappeared. It's in the Kindle Store US here and UK here.
And if you don't have a Kindle, don't despair, because all of those early episodes are online right here.
Posted by Dave Morris on Thursday, December 29, 2011 No comments: 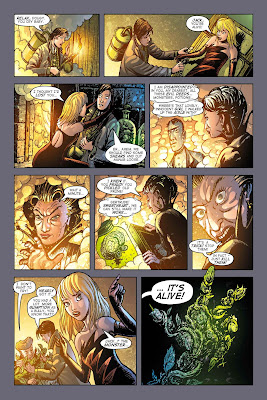 Here's the last page of the advance look inside Mirabilis Vol 2, which is on sale from Print Media Productions early in the New Year. You can find it on Amazon UK here and Amazon US here, and on the Book Depository (which is taking pre-orders) here.
If the listing says it's a paperback, ignore that - it's just Amazon playing silly buggers again. The book is in fact a gorgeous, beautifully printed hardcover just like Vol 1. Happy Christmas!
Posted by Dave Morris on Saturday, December 24, 2011 No comments: 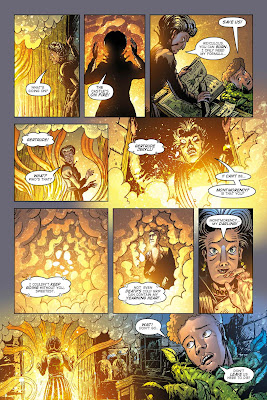 Posted by Dave Morris on Thursday, December 22, 2011 No comments: 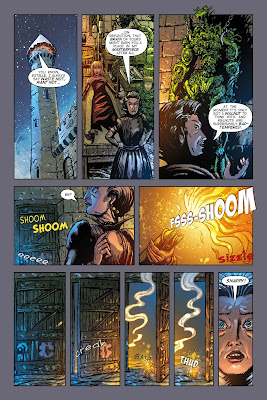 Posted by Dave Morris on Tuesday, December 20, 2011 No comments: 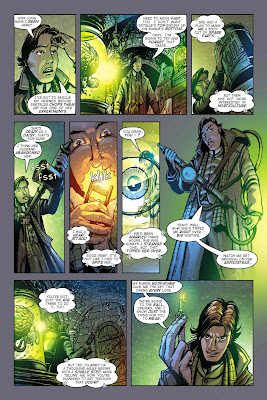 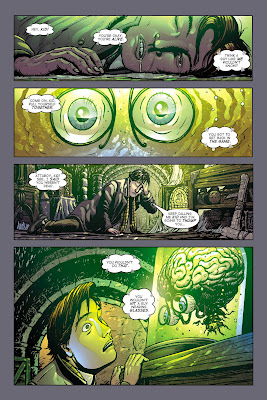 Today we begin our own Advent-ure (see what I did there?) as we count down to Christmas with a sneak peek at Mirabilis Volume Two, on sale next year. And if you just can't wait (or if you want to know exactly why Jack is talking to a brain in a jar) you still have time to grab yourself a copy of Volume One from Amazon US, the Book Depository or Amazon UK.
Posted by Dave Morris on Friday, December 16, 2011 No comments: 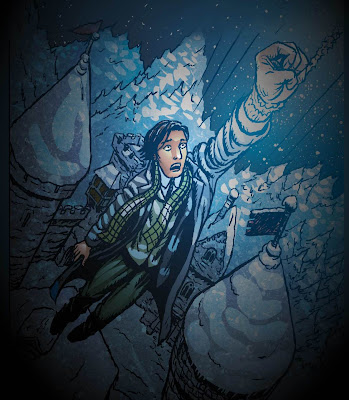 My first publisher was the legendary Angela Sheehan at Grafton Books. In those days, I wrote choose-your-own type fantasy gamebooks, and every publisher wanted a series so I kept pretty busy. I worked with Philippa Dickinson at Corgi, Elizabeth Roy at Knight Books, Gill Evans at Mammoth, Mary Tapissier and Marion Lloyd at Pan Macmillan, and many more.

You can see the pattern. British kids’ and young adult publishing is run by women. There are no men. None. Well, there is the (also legendary) David Fickling, but there really is only one David Fickling!

It’s no mystery how this came about. Institutions that are run by men tend to appoint men, institutions run by women appoint women. So inevitably there’s a positive feedback loop that will take you one way or the other. And it wouldn’t matter, except that it used to be said that “boys don’t read” – which is almost perfectly analogous to the videogames industry truism of a few years back that “girls don’t play games”. That’s because female editors may not be the best people to judge what boys like, just as predominantly male game developers didn’t have much idea how to make games that girls would play.

(I once said to an editor that she could find out what kind of stories boys like by looking at the videogames they play. Her reply: “Oh, we did that once. Back when games were at their height.” To her, videogames were a passing fad.)

It is getting better. Kate Wilson at Nosy Crow (now, she really is legendary) took the radical step of actually asking boys what they like to read about. I was going to say it’s not rocket science, but actually rocket science turns out to be one of the very things they’re into – along with dinosaurs, robots, warfare, sport. Really, though, they just want stuff to happen. Less jaw-jaw. Boys did read Harry Potter – more boys, in fact, than girls – and when that juggernaut first gathered momentum, one publisher declared, “It seems like adventure is back in fashion with kids.” The fact is, of course, it never went out of fashion. It just wasn’t being published.

Having said all that, I don’t see fiction or games coming down along gender lines. Okay, there’s chick lit and movies like Mamma Mia – but, averse as I am to them, I have no more liking for over-testosteroned stuff like The Losers. What the average boy wants in a book is just the same as the average girl wants: a cracking story that makes you wonder and care what’s going to happen next. So it’s good for fiction that there’s been a move away from twee, leisurely, soft-concept stuff in favour of exhilarating, character-driven, high-stakes, high-concept storylines. We can pretty much thank J K Rowling and her editors for that.

And all of the above is a preamble to say that one of the best places to find that kind of fiction reviewed is the Book Zone. (“For boys” is added parenthetically, though these are books just as much for gutsy girls like Maria Jones in The Box of Delights.) As I often look at the Book Zone to find my next read, it was very nice to find Mirabilis Volume One reviewed there – and simply stunning to see that Mr Hartwell described it as one of his favourite books of the year. Leo and Nikos and I were reet made up by that, I can tell you.

Now, we had hoped that Mirabilis Volume Two would be out in time for Christmas, but the schedule has been thrown out by shipping times from the printers (in Bosnia – well, it’s a long way from there to the North Pole) and the fact that Leo has got sidetracked by some for-hire work, meaning that Volume Three has got pushed back to the autumn. But turning that around, the good news is there will be two new Mirabilis volumes next year (Volume Two early in the year, Volume Three in October). And you still have time to get Volume One before Christmas - at 25% off on the Book Depository with free delivery anywhere in the world. They must be using reindeer.
To make up for not getting the new book out for this Christmas, we’re going to be running a 5-page preview over the next week, starting tomorrow. This is the episode that, if The DFC had continued, was originally going to be called “Lock and Load”. Grab your torches and pitchforks! To the castle!
Posted by Dave Morris on Thursday, December 15, 2011 3 comments: