The shows that rinse and repeat 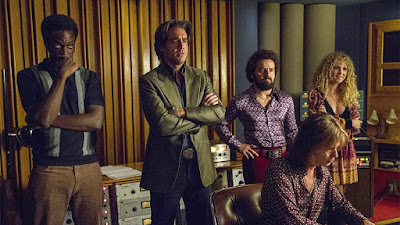 Who watches the Watchmen? I will, but only if you can assure me that the story is properly wrapped up in one season. I've seen too many TV shows that throw a bunch of plates in the air, keep them spinning for a dozen episodes, adding more until it looks like they'll all come down either in a triumphant flourish or a crash of broken crockery -- only for the season finale to tie up no loose ends whatsoever; merely saying, in effect: "Come back next year for more of the same."

I know why writers do it. Well, yes, there's the lure of another payday, obviously. That's not nothing. But also it's because bringing a story together is hard. The job is so much easier in the early stages where you can throw everything in. The only limit is the writer's imagination. But then, around the midway point, the terrible hectoring inner voice can be heard that speaks up for the craft. Things that have been set up must pay off. Threats must be faced and dealt with. Promises that have been tacitly made with the viewer must be kept. If you're lazy, you tune that out and try to keep the throw-everything-in stage going forever.

Serious offenders include The Fall, whose first series followed a nail-biting cat-&-mouse between the detective heroine and a serial killer. How would she catch him? And what would the personal cost be? As it turned out, she wouldn't catch him. Rather than dream up a new adversary for season two, the writer just had him slip away so that the high jinks could resume next time. Nothing was resolved.

Likewise with Killing Eve, where after a season of queasy death-wish teasing between the antagonists, the psycho we're meant to like slips away with a knife-wound in her side. "Go after her!" I wanted to yell at the heroine (the eponymous Eve; the show's title was another promise never kept) who could even then have brought the story to a satisfying conclusion. "She's literally ten seconds ahead of you and she's bleeding out." But no. Somebody else comes in and says, "It's too late. She's gone." And you can almost hear Eve thinking it will go on and on, this chase, like the plot of The Worm Ouroboros, only in this case not because of an elegant reflection of the story's underlying themes but just to ensure ongoing pay packets for those concerned and an endlessly interrupted coitus of spy-porn wankery.

Oh, and Westworld. Great first season. But by the finale they clearly have nowhere interesting left to go, so it ends with the gnawing sense that new rails will be laid in front of the engine forever. It even looks like it's ending on a cliffhanger. That's the worst crime for any ongoing series, if the cliffhanger comes simply as a break in the ongoing plot rather than being a new threat emerging after old strands have been tied up. The show's writers are saying, in effect, that the whole season you thought was going to have a beginning, middle and end has in fact been just the bringing together of pieces so that the real party could begin in season two. Aristotle would punch 'em in the kisser.

But look. It can be done well. Vinyl built up over ten episodes as multiple narrative trains hurtled towards collision. The finale brought all the immediate threats to a conclusion while setting up the basis for another season. Instead of just breaking at the end of the season as though it were just another episode, there is closure there and in the closure the seeds of a new direction. Unfortunately Vinyl never got a second season while less carefully crafted shows hurtle on and on towards the eventual heat death of the medium.

A conscientious writer (Alan Garner, for example; or arguably J Michael Straczynski) won't start until they have the end of the story planned. As Andrew Stanton explains below, it's "knowing your punchline, making sure that everything... is leading to a singular goal". That's why I'd ask every show creator about their ending in the first pitch meeting. If you have a destination in mind, the journey will be much more enjoyable -- and, if the Fates are kind and it turns out the dollars are there for another trip, you'll have satisfied customers queuing up to go again.

How not to script an action climax


Picture this . You’re at a Hollywood pitch meeting: "And as the LEM descends towards the moon, Armstrong has a crisis of confidence. 'I can't do it, Buzz!' he says. But then he has a dream in which he's standing in the Midwest somewhere with a baseball bat, and Chuck Yeager is there dressed as a giant eagle and he's about to pitch the ball. Neil drops the bat, but Chuck tells him to pick it up, he can do it. And as he reaches for the bat we're back on the LEM and he's reaching for the controls. Determined look from Neil, admiring look from Buzz, swelling music, and then we cut to Houston and after a long tense pause: 'The Eagle has landed.'"

That’s terrible writing. Yet it’s the sort of thing that’s all the rage in superhero movies. We’re at the climax and the hero is on the brink of defeat. They go into a dream sequence, get a pep talk from a (usually dead) mentor, then snap back to the present and "with one bound" they’re free and turn the tables on the baddie. Thor: Ragnarok, Captain Marvel, you name it.

To be clear, I'm not complaining about mentors (though they are overused because every screenwriter swears by Joseph Campbell these days), I’m complaining about the interior vision in which the hero is given a boost of wisdom or courage: ‘Here’s your elixir like Campbell talks about on page 497. Now get back and fight.’ It's lazy writing. The dream sequence approach is no different from fixing all the loose ends in a story by dropping a god out of the machinery.

It’s bad writing because it’s telling, not showing. It kills momentum by building to what ought to be a nail-biting moment and suddenly swerving off into a fantasy scene. In effect, rather than crafting the story, the writer is taking a time out to try and convince us why his or her story should work. Those writers are so used to notes and rewrites that they don’t know that’s not how the finished thing should look; it’s as though you arrived at a building and found the only way to the upper storeys was by way of scaffolding left by the builders.

Good writing would be to have already done the work throughout the story so we are able to see the character’s arc leading inevitably to this point. Examples: Iron Man and Captain America: The First Avenger. Or, returning to the building analogy: put the bloody stairs in.
Posted by Dave Morris on Friday, December 20, 2019 No comments: