How I made my monster - Part 3 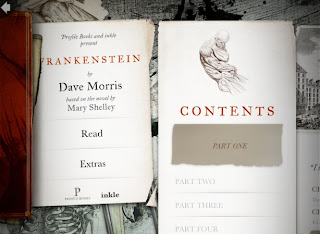 I presented Profile Books with a shortlist of classic novels that would be suitable for an interactive makeover. Far from favouring Frankenstein, if anything it was probably the one I was most reluctant to take on because of my company Spark Furnace’s own Frankenstein’s Legions project. That's a very different take on the source material (science fictional and picaresque rather than literary and tragic) by author John Whitbourn, but even so I was a touch concerned about possible confusion.

Luckily, Profile picked Frankenstein anyway, and it is unquestionably the ideal work for this treatment. There are even moments in Shelley’s original when Victor Frankenstein speaks directly out of the page: “I cannot tell you how my process works,” or, “If I die, swear that you will kill the fiend.” He’s talking to Captain Walton, of course, but Walton is our surrogate. There couldn’t be a better fit for what I wanted to do in building a relationship between reader and character. You get to influence Victor Frankenstein, not merely in building up trust between the two of you, but in encouraging his obsession or, alternatively, in helping him to reconnect with his friends and family. You are not merely his confidant; you have the ability, if you choose, to be his mentor.

At first I thought that Spark Furnace would have to hire the coders too, but by luck Michael met up with an app development company called Inkle. They had written a markup language which means that authors can write an entire gamebook as a text file, including all the variables and conditional links, and that can just be poured into the engine and immediately you have a working app. This was particularly useful to me, as I’ve done so many gamebooks that I mostly keep the flowchart in my head and just write everything straight down on the page. (Warning: if you’re thinking of writing an interactive book, don’t try this at home.)

While I was writing, Inkle laid it all out beautifully and added dozens of 18th and 19th century images to create the kind of luxurious coffee-table look that readers expect of book apps. The only picture that is actually illustrative is the one of a solitary figure in a bare wood, used as the “book cover”, which was designed by Profile’s art director. I specifically didn’t want any pictures that depicted scenes from the story because – well, are we children? A good novel is already 100% immersive, and even if it’s Phiz or Paget or Shepard, I’d just as soon see the scene the way my imagination renders it, thanks. That’s why Inkle’s decorative images and textures are so perfect; they subtly enhance the mood without pointing an intrusive finger at specific details.

Returning to the medium in which I started out, after a long detour through videogames, television, comic books and novels, was a little daunting. Would I emerge as the triumphant master of my (much more than) 10,000 hours, like Odysseus dispatching the upstart suitors, or would I merely reveal that I couldnae hack it anymore? With some relief I can announce that Penelope’s honour is safe: Frankenstein reached the Top 10 in App Store books on both sides of the Atlantic and has garnered some glowing reviews. Et voilà:
You can buy Frankenstein, for iPad and iPhone in the App Store here.
Posted by Dave Morris on Wednesday, May 16, 2012