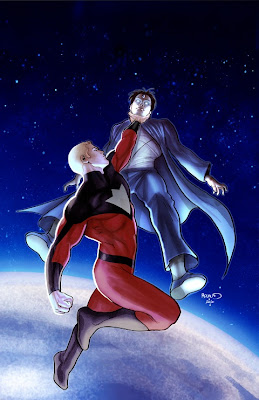 Capes and cowls had lost their luster, and I was thinking it was me. Apart from Bendis’s run on Daredevil and Whedon’s Astonishing X-Men, I haven’t been reading superhero books regularly for years. Oh, okay, there was Ed Brubaker’s Sleeper – good hard-boiled fun, but I’d trade all of those for one issue of Criminal.

My must-have titles these days: B.P.R.D., Hellboy, Buffy, Hellblazer, Criminal… Some have their roots in superherodom, but they’ve mostly looped the loop to the days when Kirby argued for heroes to wear utilitarian uniforms. Look at the way the Batman’s togged out in Joker – it’s not really a costume at all, a detail that tacitly acknowledged how tights and underwear would have blunted the hard edge of Azzarello’s and Bermejo’s story.

So I was down on superheroes, and I don’t seem to be the only one. My local comic store (Avalon Comics on Lavender Hill – hi, Bruce and Mark!) is sadly closing its doors after two decades. The kids aren’t coming in any more, and the increasingly long-in-the-tooth fanboys are getting distracted by wife and family.

Is narrowcasting reaching its logical conclusion, the collapse of the market to a singularity? The reasons for the decline in popular comic book readership, and what might be done to address that, is a big topic to chew. It would be the height of arrogance for me to lecture Marvel on ways to turn it around, so I’ll save that for next week. What I want to share today is my eureka moment, the comic that showed me superheroes can still enthrall and excite. That comic is Irredeemable.

You know how long it can take for a new thing to permeate through all the background noise? I must have been gazing blankly at ads for Irredeemable for almost two years, but it took a review on Guys Can Read to make me actually buy a few issues to see what all the fuss was about.

All the fuss? There hasn’t been nearly enough fuss. You want pace, inventiveness, rich characterization and sheer bravura storytelling? There's very little in either comics or prose fiction that can hold a candle to Mark Waid's Superman-goes-bad saga. I'm finding it hard to remember the last time I came across such a must-read story. After two issues, I bought the whole run to date. Sleep and eating were out of the question; each plot twist was more compelling than the last. There hasn't been a story this gripping since the second season of Fringe. 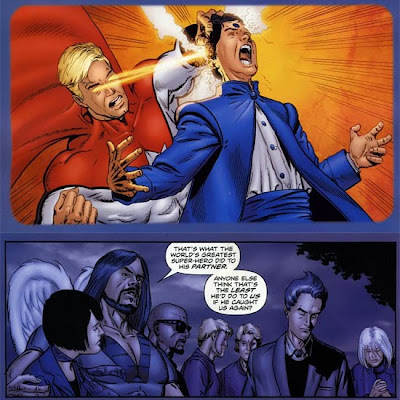 In a nutshell: what if Superman wasn’t brought up by Jonathan and Martha Kent? Without a stable, happy home life, he isn’t equipped emotionally to cope with the strain of being the Earth’s mightiest hero. And when he snaps it’s not at all pretty. Batman (his stand-in, that is, in Waid’s universe) dies after seeing his wife and kid vaporized by heat vision. The surrogates of Hawkman and Jimmy Olsen suffer much worse fates.

“I will do such things,” said Lear. “What they are, yet I know not, but they shall be the terrors of the earth!” So wait till you see what someone like Superman might do if he turns evil. It gets grisly. It will make your blood run cold.

What I particularly like: Waid’s story is completely driven by character. As a writer, I know the temptation to just block out a plot and make your characters run it. But when it's done properly, the plot is just something that arises from the character's lies, decisions, revelations, secrets, aspirations and actions. The characters live their lives and a story arises. This is how Waid does it in Irredeemable - and on an ongoing title it's incredibly brave, because you could be painting yourself into a corner. And you need to keep tossing another couple of plates up to be ready to replace earlier ones when they finally stop spinning. It could all go so horribly wrong, and there’s no going back to fix it.

To corral such a breathtaking narrative and still be able to keep the surprises coming, that’s the sign of a master at work. And the surprises Waid throws at us are rarely coming out of the blue. The most effective ones are blindingly obvious – after they’ve happened. “Surprising yet inevitable” is every writer’s goal, yet not easy to pull off. And Mark Waid keeps on doing it. Hmm, I can see how admiration can start to turn into hatred.

So, if you are rash enough to think that superhero comics have no power to impress you, and if you don’t mind starting on a story that will have you ignoring family emergencies, urgent calls and house fires for the next few hours, get the whole set of Irredeemable (twenty-three issues so far) and plunge right in. And don’t say I didn’t warn you. 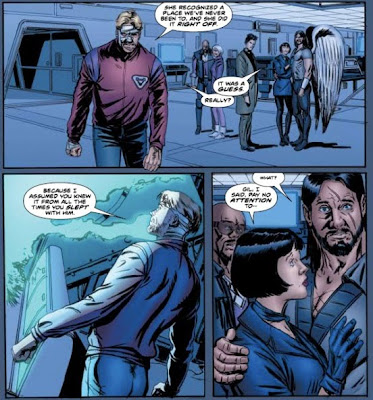