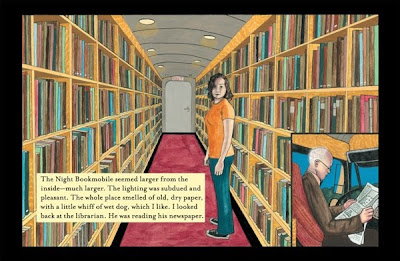 Today's Panel Borders audio interview with Audrey Niffenegger is now available for streaming or download. Most of the discussion is about her graphic novel The Night Bookmobile. I'm planning to read the book (intriguing reviews from Danny Graydon here and Graphic Novel Reporter here) having found that the original novel of The Time Traveler's Wife is a lot more complex and interesting than you might think if you've only seen the movie. And Ms Niffenegger did all the art herself too, so (as one of those comics writers who rely on somebody else to do all the hard work) I wouldn't dream of saying anything negative anyhow.

A reservation I have about the interview itself is that it betrays the typical British awkwardness about comics. Even that term "graphic novel" - I don't object to that, unlike my good friend Peter Richardson of Cloud 109, for example, who finds it unbearably affected. When it's used to mean a comic that's ashamed to say it's a comic, then I agree. (That's not why Ms Niffenegger herself used it, incidentally, as she explains in the interview.) But as a way of saying, "This is a complete story in fifty or more pages" as distinct from a 22-page monthly comic book, then it's fine.

The interviewer does wander off a bit into discussion about how comics pages can be designed so that you read them Calvino-style in multiple directions at once, and how that can lead to a disconstruction of the very nature of linear narrative, blah blah blah. None of which I have the slightest patience for. A story is good simply insofar as it engages the reader and makes them care enough to want to know what happens next. A good (ie effective) comic is a storyboard of static images, much like a movie but with the advantage that comics are a literary medium and can therefore provide the depth that a movie, having a set pace that the viewer must fall in step with, doesn't have time to explore.

But that's a minor quibble. Overall, if you can get past the zoo-visitor's wary fascination with the outlandish beast that is a British literary critic's view of comics, it's an entertaining show that takes in Doctor Who, comics, time travel and storytelling in general. Well worth a listen, even for someone who prefers Daredevil to Derrida.
Posted by Dave Morris on Thursday, March 17, 2011