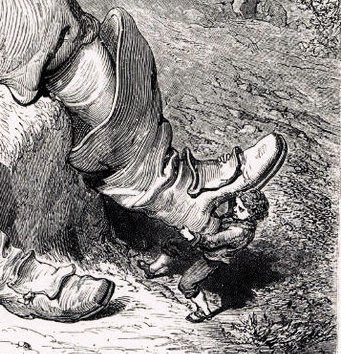 Every so often these days, somebody suggests using Kickstarter to fund one of my comics or gamebooks. I expect it was similar in the 1930s – “You just need to put it on the wireless.” Did Caxton tell Malory that the printing press would make him rich?

I’m no expert on crowdfunding. In fact, so much not an expert that I’m not even sure about the “crowd” part. Most projects seem to get off the ground because less than a thousand people stump up an average fifty dollars apiece. Those T-shirts had better be stunning.

But let’s say you put your comic or gamebook on Kickstarter and you raise $100,000. Whoop! Quit your day job, right? Well, no… Because you now have to print, parcel and post about six thousand copies of the book. Plus some T-shirts and a free lunch for the rich kids. A conventionally-published book doesn’t get onto the bestseller lists by selling six thousand copies.

Admittedly, by using Kickstarter as a publishing platform you cut out the bookseller. So that’s 50% of the cover price that you don’t have to give away. But you do have all the manufacture and fulfilment issues to take care of.

What’s the profit margin on a Kickstarter campaign? I haven’t looked (see Not An Expert disclaimer above) but I’d expect them to vary wildly. By profit, I mean the money you’re left with when the last cheque clears and the last book goes sliding down the chute at the post office. With that you have to cover all your fixed costs – writing, art, typesetting, leaving aside the risk of running the Kickstarter in the first place.

This is why I’m sceptical when somebody tells me how easy it would be to fund an entire book through crowdfunding. I can do all the writing for nothing (I didn’t pay myself a penny for all the work I did on Mirabilis books 1, 2 and 3, including layouts and lettering) but there’s still artwork costs. Editing, if you care about quality. Lettering. Typesetting. Printer set-up.

I’m pretty versatile. I can do about three-quarters of that stuff myself. But I still have to pay artists and colorists. And at the end of the rainbow I’m even hoping there might be a few coins left to pay for the thousands of man-hours I put in along the way.

Kickstarter is a way of raising a subscription to print books. It also serves as a great way to enthuse a core of fans who will hopefully spread the word about your project. But it is not a viable way to raise development funds – unless you are super-famous to begin with, in which case you probably don’t need the development funds that badly anyway.

But Kickstarter as a publishing platform? That’s something else. Now you have to make enough on sales to cover costs from scratch. I’m often asked about gamebooks because I wrote a lot of them in the ‘80s and ‘90s. A gamebook takes about four man-months to write. (My interactive adaptation of Frankenstein took nearly eight months, but that was much bigger than a regular gamebook.) Interior art, call that a man-month. Cover, editing, typesetting, another man-month. So a minimum of six man-months for just a black-and-white gamebook. For a full color graphic novel like Mirabilis it’s getting on for twice that.

Writers and artists do need to eat. (Nobody in the movie or publishing industries believes this.) No executive wants to pay them as much as you’d get for flicking paperclips around an office and setting up PowerPoint presentations, but even so that Kickstarter-based publisher will need to find some $23,000 to fund the gamebook, $46,000 for a graphic novel. If you build in a 20% profit on sales, that means the campaign will need to hit a quarter million to get the OGN paid for.

That’s not how it works, of course. I didn’t go out and get investors to do Mirabilis. We had some money in the early days from David Fickling and Random House, but when The DFC (blessed be its memory) had to fold, we didn’t shut up shop. I continued writing for nothing. I went out and found supporting jobs that would pay for Leo and Nikos. This is how most creators have to work. Kickstarter may be a shiny new thing, but it’s not going to change that.
Posted by Dave Morris on Friday, June 07, 2013