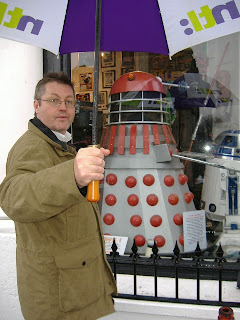 I came across this in a shop in Suffolk. It's a bit of a wonky model (built for a stage play later rewritten as the first Patrick Troughton story, "Power of the Daleks") but at least it isn't all rivets and Quake-industrial styling.

Oh, and another thing... Daleks nowadays move like motorized wheelchairs. But in those days they glided around with a really eerie grace, the way Terry Nation intended when he was originally inspired by watching how dancers move around a stage in long skirts.
When you're talking about Daleks, ranting is really the only way to go ;)
Posted by Dave Morris on Saturday, March 21, 2009