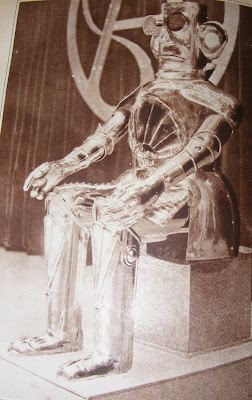 When I was about six or seven, my Dad and I would have pillow fights with special Hogwarts (or rather Greyfriars) style rules. You could keep throwing pillows as long as you knew the next letter. But if you zeta-ed when you should've theta-ed, it was the other fellow's turn. To this day I know the Greek alphabet off by heart. I can reel it off quicker than the English alphabet, as a matter of fact.

That alphabet was one of about a million facts and look-up tables in a book my Dad got for his thirteenth birthday. I still have it: The New Illustrated Universal Reference Book. It's a big old door-stop of a thing that would do 1d6+3 damage in any role-playing game you can name. And my favourite item in the whole book is this photograph. The caption reads:

THE ROBOT "ALPHA"
On the word of command it will stand, raise both arms above its head, and reply to questions. It weighs half a ton and was created by "Astra".

(You see what I did there? The Greek alphabet segue? Can't say you don't get your money's worth.)

Well, well - enigmas within enigmas. When exactly was this magnificently odd mechanical man built? The book was published in 1933. But we'd already had Metropolis in 1927, after which wouldn't a big chunky robot like this seem a bit outmoded? Though, having said that, Alpha undoubtedly wins hands down in the elegant design stakes against Elektro, the blocky robot exhibited at the Westinghouse stand at the 1939 World's Fair.

And then there's the most intriguing mystery of all: who was "Astra"? A Randian visionary artist? An electrical engineer with a sense of mischief? A would-be super-villain who gave it all up through lack of venture capital? Or just an especially imaginative music hall entertainer?

Stylistically, Alpha is not at all right for the Belle Époque fantasy of Mirabilis, but something about him keeps nagging at me. I want to use him somewhere, somehow, someday. With ears like that, he can't be left to languish in obscurity.
Posted by Dave Morris on Monday, April 20, 2009