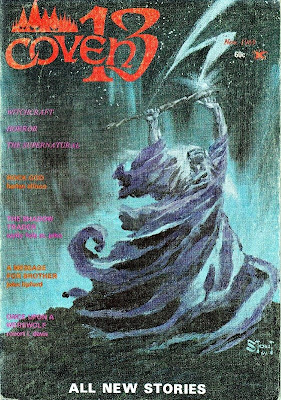 Coven 13 was a magazine of horror and fantasy fiction that flared briefly and vanished after four issues from September 1969 to March 1970. The approach to scaring readers was fresh and sophisticated, taking Fritz Leiber's vein of modern urban horror and giving it a kind of cool late-'60s vibe. In Alan Caillou's "Odile", a young witch arouses violent feelings in the neighbourhood, but after she is murdered it all gets much worse. In Harlan Ellison's "Rock God" a Madison Avenue office block becomes the epicentre of prehistoric worship.

And the little lacings of whimsical fantasy amid the horror were of a distinctly Unknown flavour: imps that signed contracts over a Campari and soda, family ghosts that took out the trash, princesses with gold fur.
The mag (we didn't call 'em "zines" in those days) was edited by Arthur H Landis - for whom, incidentally, I landed a three-book deal with Donald A Wollheim when I was still in my teens. (I never saw a commission. Oh well.)

But the best thing about Coven 13 by a very long way? Almost all the art, including four fabulous painted covers, was by the legendary William Stout at the very start of his career. He obviously had a profound influence on the youthful Morris imagination - look at the opening image from Mirabilis episode 4 ("The World Turned Upside Down") which came to me full-blown out of a daydream, or so I thought at the time, and compare it to the cover of Coven's second issue, above. To think that was lurking in there all those years, waiting to be dredged up out of the subliminal mire. It fair gives you a shudder. 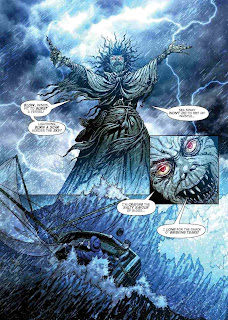 Email ThisBlogThis!Share to TwitterShare to FacebookShare to Pinterest
Labels: Coven 13, creative process, Dark They Were and Golden-Eyed, William Stout