While talking about dialogue-heavy scenes recently, I went over some of the ways to make the action and conversation in the scene more interesting, but I didn't discuss how to ensure there's visual interest.

This scene is of Estelle's father and Jack's colonel honing their shooting skills by taking potshots at empty champagne bottles. (Before clay pigeons, glass bottles really were used for this, though not usually ones with Moet et Chandon written on the side.) 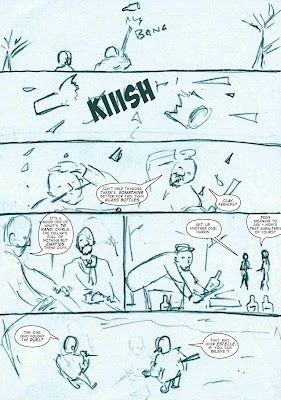 So what have we got here? A high angle close-up of Lord Deerdand aiming straight at the "camera". Reverse that for a wide angle as he shoots. Close on the bottle shattering. Two-shot of them ducking shards of glass. New angle two-shot past Lord Deerdand as he breaks open his gun. Pull out to show the gamekeeper setting up another bottle in the foreground while the conversation continues in the background. Then a high angle looking down on them.

If you jumped the camera around like that in a movie, people would have epileptic fits. But in a comic it's essential. If you just had half a dozen panels that kept more or less the same angle on the characters, your reader would lose interest even if the dialogue was by Tarantino. So instead you go for a mix or close-ups, long shots, high and low angles, and cutaways to keep the eye from getting bored. 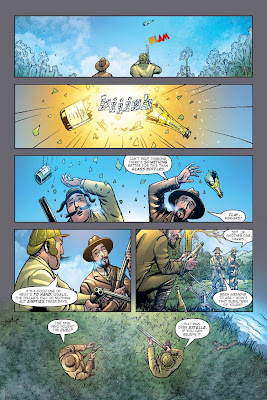 Rules can, of course, always be broken, but this one only if you deliberately have a sequence of panels where you keep almost exactly the same view. For example, two guys sitting on a park bench:

Well, that's a style that suits a certain kind of comic. But notice it only works if you keep the exact same angle throughout. When you have two consecutive panels that are closely but not quite the same shot, it doesn't come across as a stylistic effect, it just looks wrong. In cinematography this is the 30-degree rule: in two consecutive shots, the angle on the main character should always change by more than 30 degrees. (The jump cut is an exception, though between two comic panels a jump cut looks a zoom anyway.)

On the following page, incidentally, there's a big panel that shows us where Deerdand and Griffin are standing in the grounds of Dunsayn Manor: 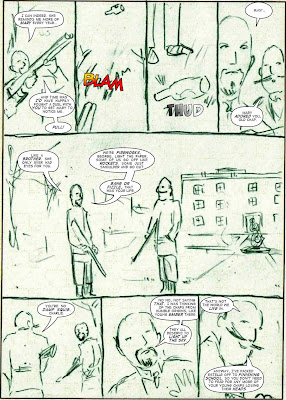 Providing an establishing shot like that is not always essential, but if you skimp on establishing shots too much it creates a sense of disorientation. Try watching too many episodes of Beauty & the Beast or Alias season 1 and you'll see what I mean. I often prefer to come into a scene on a tight shot and leave the establishing shot for a page or more, as here, and that's just a style choice.