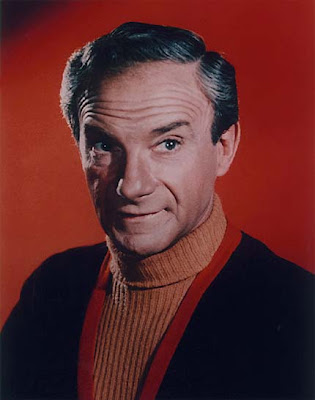 Dr Zachary Smith on Lost in Space… I guess he was the first one I noticed. Then I started to pick up on them in literature. Quilp in The Old Curiosity Shop. Long John Silver in Treasure Island. Mr Solon Aquila in Alfred Bester’s short story “5,271,009”. Loki, of course – he's pretty much the original template. Was Falstaff one? Maybe. And most of the classic, highly-flavored fictional detectives from Holmes to Columbo certainly fit the bill.

Disney movies have always featured them, from Baloo to Cap’n Jack, forever upstaging the bland hero and heroine of the story. But it’s in television dramas that you’ll spot them most often. Ben Linus in Lost. Rocket Romano in ER. T-Bag in Prison Break. Uniquely, Fringe has two: the magnificent Walter Bishop (obviously) but also the deeply sinister David Robert Jones, who was sadly wasted, in both senses, at the end of season one.

They are characters who emerge as larger than life. Characters who, through their unpredictability and eccentricity compel our attention. We know that whenever they appear we’re going to be entertained, and that the story is about to spin off in a new and surprising direction.

Very often they started life as secondary characters or just as guest stars, but the combination of script and performance creates a personality that steals the limelight. Ben was only supposed to be in Lost for a few episodes, but pretty soon he’d become the main reason to watch. Michael Emerson’s portrayal of the character has to get at least half the credit for that, just as – a generation earlier – the young Robert Hardy did such a show-stealing turn as Sergeant Gratz in the WW2 drama Manhunt.

I’m intrigued by this type of character because it seems unlikely that the writer knew in advance what they were tapping into. You can’t really cook them up to a recipe, it’s more of a happy accident.

They are mostly aspects of the Trickster, of course: clever enough to initiate far-reaching schemes but rarely wise enough to look ahead to the consequences. Viewed in that light, Benjamin Linus and Sgt Gratz are uncustomarily sensible examples of the type. More often these fellows are wilful high-maintenance characters, stirring up continual trouble by reason of the very flaws that make them so interesting and that set them apart from the rest of the cast. Gaius Baltar, for instance – he’s a perfect Trickster figure: brilliant, selfish, careless, devious, capricious, craven. An absolute gift to a storyteller.

I’d love to create such a character in one of my own stories. Caelestis in The Chronicles of the Magi comes closest, but he’s at best a Topher, which is very far short of a Spike.

Anyone got any favourite Tricksters of their own?
Posted by Dave Morris on Saturday, November 28, 2009