This is kind of cool until you realize that the book doesn’t add a whole lot apart from size. If you’re at home, you might as well use a laptop or the TV screen and then the characters could be part of the interactivity. If you’re on a train, lugging the book negates all the convenience of the iPhone. Doh.

Of course, the book would serve to make the whole interactive experience more comforting if young children were conservative creatures afraid to embrace new media. But no, that’s their parents. Children are continually engaged in forming a model of the world from scratch and will take on board anything that’s put in front of them. To them, iPhones are no less familiar than books. And there you have the USP of the human race in a nutshell.

Seeing this after reminiscing so recently about interactive stories set me to thinking about Figments, a "story world" game for young children that Leo and I dreamt up in the late ‘90s. We couldn’t sell it to games publishers nor to TV networks either, though not for want of trying. (The games execs only had eyes for twentysomething boys, the TV execs were dazzled by reality TV and thought interactivity meant choosing from multiple endings. As they still do, in fact.)

Figments used a “cascade of events” concept to create narrative strings that the user could influence by pointing things out to the characters. Think The Sims only the characters are like little playmates rather than lab rats to be tormented and studied. When I have a day to spare, I’ll tell you all about it. 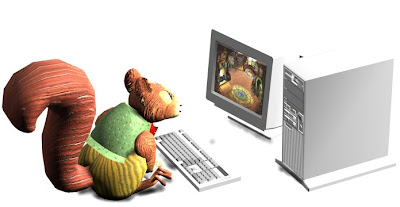