Comics on the iPad

Comics by comiXology concept from comiXology on Vimeo.
On the opening day of the Angoulême comics festival comes more news about Apple’s eagerly-awaited iPad and how it can be used for reading comics.

I was already a convert on the strength of just the iPhone. Paper comics are nice to collect, sure. I can hardly move around my study without tripping over piles of Hellblazer and B.P.R.D. back issues, never mind all the graphic novels (they live in another room). But from a commercial point of view print comics are on a hiding to nothing. High print costs and changes in distribution have taken comics off the newsstands and into specialized hobby outlets. New readers aren’t finding comics now, and meanwhile the shrinking hardcore who are reading them have driven the content more and more niche.

Graphic novels in print make even less sense, especially in the tiny UK market. Even if you include the USA, the average sales for an English-language graphic novel in print form are around 25,000 units a year. On a £10 retail price, the publisher is lucky to take £1.50 a copy after print and distribution costs – and out of that they have to pay editorial, advertising and the creators’ royalties. You could make more money by hollowing out the book and selling it with a frozen pizza inside.

Now flashforward to a world of iPad comics. You can now reach a much broader, and therefore potentially much bigger, market, as Eric Stephenson of Image Comics points out:


"There's tremendous potential for the iPad to make comics available to a much wider audience than we're currently reaching. Paper comics will no doubt around for a long time to come, but I think this is an important step in making comics more accessible than they've ever been."

A broader market means more accessible content, which will translate much better into movies and videogames and TV shows – which is, after all, the commercial goal of a lot of this stuff in a medium-agnostic world.

But forget the bigger, broader market for a moment. Just assume you’re a publisher and you get the exact same sales figures on iPad as you were getting with a print book. Now you’re selling for about $9, that’s £5.50. After Apple’s cut you’re taking £3.85 per unit sold – more than twice what you were getting with print books. And advertising and editorial overheads are still there, but you don’t have to worry about shipping crates of books to stores all over the western hemisphere.

Overall, once everybody else is paid, your profit as a publisher is going to be three to four times what you make by selling a physical book.

So what? We care about the content here, right, not the business model? Well, to that I’d say that the days when an author could live in an ivory tower are long gone. Nowadays you need to understand how the publisher is making money from your work, partly so that you can negotiate a fair deal and partly because you might be doing it all yourself before long.

But, okay, leave the commercial stuff to one side. As a reader, why should I be excited about comics on the iPad? 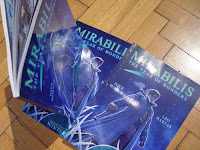 First of all: they look better. Leo and I printed up some copies of Mirabilis Book One on Lulu because we wanted to actually get our hands on the thing and show it to friends. And Lulu’s print quality is pretty good – better than you’d see in 90% of the graphic novels on sale in your local bookstore, if indeed you can find where they keep the graphic novels in your local bookstore. But you know what? Gorgeous as Leo's and Nikos's artwork is, it looks even better on screen.

I’ve been a comic book fan for forty years and yet I would prefer to read a graphic novel on an iPad. But you don’t have to choose sides on this. Based on trade paperback sales compared to monthly comic books, if 100,000 people buy an iPad comic, as many as 15,000 of them will also want to buy the printed book later.

Okay, sorry, I’m back onto the financials there. And you don’t have to plan your comic as a profitable enterprise. The good news is, even if you are only doing it for love, putting it out on the iPad still makes more sense.

On top of that, electronic publishing makes it a lot easier to give customers a free sample before they buy. With so much content around to choose from, who these days is going to walk into a bookstore and hand over $15 for a graphic novel they know nothing about? Affluent, dyed-in-the-wool, older readers – and not all that many of them. We’re acutely aware of this with Mirabilis, which is likely to cost around $25 at retail and that’s just the first book. You get a lot for your money, but still – it’s got to be preferable to read the first couple of chapters for free, and then make up your mind.

And on that note, there’ll be a new episode on the Mirabilis site tomorrow. If you have an iPad, why not take a look at it on that.
Posted by Dave Morris on Thursday, January 28, 2010