UPDATE: Oct 14 2012 - I've taken down the free Heart of Ice file because the book is due to be re-released in spring 2013 by Osprey Books, along with half a dozen other gamebooks by me and Jamie Thomson - with more to come after that, we hope. Read all about it on the Fabled Lands blog. 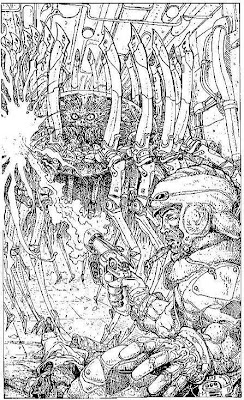 Still haven't picked up your copy of the Heart of Ice e-gamebook? What are you waiting for? It's free!

Oh, I get it. You're worried that you might not enjoy it. You're saying to yourself, "I know it's a whopping 453-section adventure game with multiple routes through the story, loads of mutated monsters to fight, characters to interact with and intriguing mysteries to solve. And I know it's a completely diceless game system and has an auto-fill character sheet so no need to fuss around with pencils and stuff. But can I be sure it's a more worthwhile use of my time than watching Jedward-v-Lady Gaga mashups on YouTube?"

Ooh, you're hard to please, you are. Well, this snippet from an interview with gamebook aficionado Efrem Orizzonte may help you to make up your mind:

EO: Heart of Ice is arguably the most mature gamebook ever written. The plot is superb, character design and development is among the finest ever seen, the atmosphere is perfect and the multiple endings mean that if you survive to the end, you can always “win” – if you can call any of the ambiguous, bittersweet finales a victory! Heart of Ice is a story full of deeper meanings, and it is so good that it may even have inspired a movie, called Post Impact. What inspired you to write such an original and mature story in gamebook format? Is there some particular message you wanted to convey to your readers?DM: I’m not so much into trying to give my readers messages, I just have certain topics that interest me and I like to get readers thinking about them. Questions, not answers. Heart of Ice got started as a role-playing session. I can pinpoint it exactly to Christmas 1976. I was back home after my first term at college and I needed a scenario for a large number of players. Believe it or not, I started with the idea of doing a serious version of It’s A Mad Mad Mad Mad World, kind of the way Failsafe Point is a serious version of Dr Strangelove. The idea of Du-En came from marvelling at the buildings of Christ Church, absolutely deserted late on a frosty night after the end of term, with the buildings lit up pale against this immense field of stars and the unyielding smell of cold sandstone, I love that. After the first game session, I was walking home with one of the players and he said how he was imagining Du-En as a movie, and what he liked was that the focus of the session had been in the tension among the characters camped out in this ruined, snow-filled city. It was big end-of-the-world action but it was centred on a small group of characters. And a mere 18 years later I took all that and put it into the book.
Made up your mind yet? 'Cause I've done all I can. The Earth is dying, ultimate power is up for grabs, and what the human race needs now is a hero. If you think you fit the bill, grab your barysal gun and get to world-saving right here.
Posted by Dave Morris on Wednesday, February 24, 2010