Silent, upon a peak in Darien 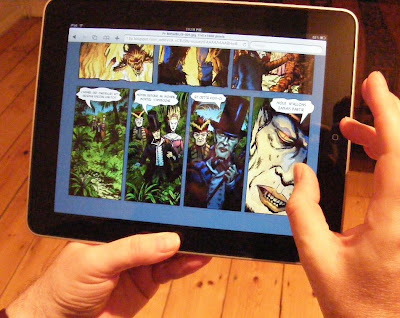 Thanksgiving 1948: Buster Keaton, the silent movie star, came round to the house of his eldest son for dinner. As the drinks were being mixed, Keaton spotted something in the living room. A massive box like the Ark of the Covenant. The numinous, flickering light drew him closer. Keaton sat transfixed in front of the television set all evening.

Years later, Keaton’s son remembered that evening: “At dinner he said, ‘This is the coming thing in entertainment.’ This was at the time when Zanuck and many others were saying television was a fad that would soon disappear.”

Technical standards for TV in the USA had been set in 1941. But by 1948 there were still only 5000 domestic television sets in the USA and each one cost as much as a Chevrolet. It was still just a gimmicky new purchase for gadget freaks.

By 1951 it was a different story. TV was now in 17 million American homes. Keaton knew the power of content to turn a fad into an indispensable luxury. He dragged his career back from the wilderness to become one of the biggest stars on 1950s TV. Meeting with Charlie Chaplin a few years later, and nettled by his patronizing attitude, Keaton said, “Do you watch television, Charlie?”

“Of course not,” said Chaplin. “Invention of the devil. Soap powder. The modern kitchen. 'And here’s a word from our paymaster…' Ugh.”

“Oh.” Keaton smiled. “So you might be surprised to learn that I have an audience of 12 million every Saturday night.”

Why am I telling you all this? Because the other night I got my hands on an iPad. (Thanks to my good friend Andrew Rollings, publisher of Hiive Books.) And while it may not be quite the revolutionary invention that TV was, a few seconds of playing with it and I was sold. Comics on the iPad look fabulous. Not just color comics, either – you’d expect that. But look at the Ditko strip from a recent Cloud 109 post. Gloriously crisp, the perfect size for reading without having to fiddle around with panel-by-panel views like on a phone. Oh, and the device is surprisingly light too.

It may not replace my graphic novel collection, but it will certainly do away with the need to buy monthly comic books. 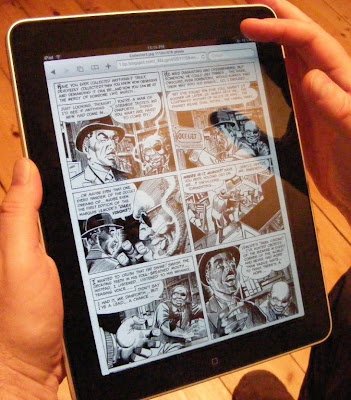