The real measure of success 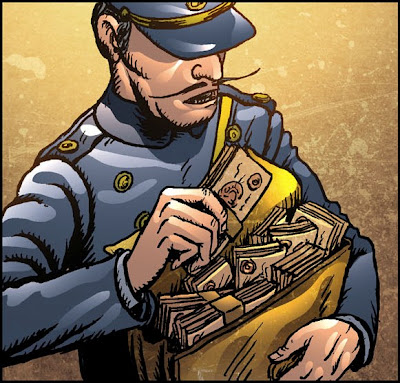 The girl came over because somebody at the bar told her I’d sold a million books that year. “Is that true?” she asked.

She slid into the next seat with a sudden smile. “I admire success,” she said significantly.

This for me was a moment of real interest. (The only one in that conversation, actually; she worked in marketing.) It was the moment that I realized I don’t admire success. I admire talent, I admire craft, and I admire achievement. They don’t always come with success as a package deal. Just ask Van Gogh – or Dan Brown.

So when a publisher pressed me recently to say what I thought about Mirabilis, it was hard to give an answer. The publisher meant: did I think it would be a success. But all that matters to me, really, is have we been successful at what we set out to do.

And that we have. I am always praising Leo’s and Nikos’s and Martin's work, but in this instance I’m not too shy about praising my own either. I wanted Mirabilis to be “a modern Tintin” in the sense of an adventure with a family of characters who you feel warmly towards. I’m very happy with how it turned out. If it were a movie, it would be what Tarantino calls a hang-out movie. You keep coming back to it because it’s fun hanging out with these characters. “Only connect!” - that’s what I’m proud of. The achievement is what matters.

You’ve got to have at least a sprinkling of the second kind of success, otherwise the first is unobtainable. Can’t paint the Sistine Chapel ceiling if the Pope never heard your name. But how much success do you want? Well now, there’s a question.

Take Watchmen, ticking over pretty nicely with a hundred thousand fans for a couple of decades. The movie comes out and suddenly a million copies of the graphic novel are sold. Twenty million people pay to see the movie. Is that a good thing? Only if you sell action figures; I don’t think it meant a jot to Alan Moore. If he enjoys meeting interesting Watchmen fans, I’ll bet he found far more of them among that original core group. All success did was to dilute the people who appreciated Watchmen the way Moore intended in a vast ocean of casual browsers who didn’t really get it. That’s fashion, not passion.

Elitist, you say? Gimme a break, I’m a comics fan. I’m not talking about the poems of Rilke here. I’m speaking as an artist, not a critic. You create a work of art to communicate something. And what you want is for the people to whom that something has meaning to come across your work and be moved by it. And the people who find some other reason to like it – well, good luck to them. They should have a nice life. But you have no investment in them. They admired your garden as they walked by, that's all.

Being true to your own vision doesn't have to mean starving in a garret. The choice isn't necessarily personal success or financial success. Stephenie Meyer's Twilight books come in for some flak because most reviewers find them tame. And that may be true; her brew of teen alienation is administered in a very weak dilution compared to, say, Kate Thompson's Creature of the Night, or Lionel Shriver's We Need To Talk About Kevin. I've only read the first book in the series and, while I don't share the opinion of those who think it's badly written, still it doesn't have anything like the subtle emotional insights of an author like Jill Chaney in her book Angel Face. But my point is that the Twilight books are genuine. Ms Meyer is writing what she wants to write. This is her version of vampires, and you may not care for it but at least you can't say it's manufactured to find an audience. That it did find quite a big audience is the icing on the cake for Ms Meyer, and I hope she enjoys talking to all the fans. I suspect she probably does. But her real achievement is that she had a vision and she put it on paper.

Francis Ford Coppola said recently, “The bigger the budget, the stupider [the movie] has to be, because it has to appeal to everyone. The smaller the budget, the freer you can be.” Another wise gentleman spoke to me the other day of having “a keen eye for volumes brimming with tone, atmosphere, character, and individuality - the comic book version of the great film producers of early Hollywood.”

And between those two statements I realized that’s where we want to be with Mirabilis. This is a labor of love. We do want it to make money. I think it will. We need it to make enough to pay our grocery bills, at least, so that we can go on with it and tell the whole story. But we don’t have to chase success – we must not – at the expense of the story and the characters and the soul of the thing. God forbid it turns into Pirates of the Caribbean 2 and 3. (Comparisons with PotC 1, you will notice, I find perfectly acceptable.)

All our experiences with Mirabilis over the last year or so have led us to this point. Like any revelation, it makes life so much simpler. We now know what we have to do: just be true to the work, make it available to those who want it, forget about anything that doesn’t serve the creative honesty of the project. Yes, it should be obvious. What can I say? Sometimes you have to go on a journey to arrive where you started and know the place for the first time.

That’s why Mirabilis will stay in our control, and no offer of movie millions (or even television thousands) will take it away from us. Because then it wouldn’t be Mirabilis, it would just be the latest corporate pod-product pretending to have a heart. It would risk becoming the awful zombie parody of itself which all wildly successful franchises eventually fall prey to.

You may now be saying, “Dream on, buddy. Your little comic strip would never get as big as something like Star Wars anyway.” And I agree. I hope it’s too personal for that. As big as Stardust would suit us just fine.

Quoted in The Guardian, Ricky Gervais says that the secret is to care about the project, not the money or the accolades: "I went into every meeting [about The Invention of Lying] with one great strength - I was always ready to walk away. I don't care if they say no and that makes me bulletproof. They don't know what to say when I say I don't care about the money. The room literally goes quiet." He adds: "If you want to make a good film, try to make your film for £40." (Note that laser-focussing on the quality of the work itself has not meant that the other kind of success eluded Mr Gervais - far from it.)

The satisfaction of a craftsman, the pride of a creator, the rapture of an artist. Those are the true measures of success. Accept no substitutes.
Posted by Dave Morris on Monday, July 05, 2010