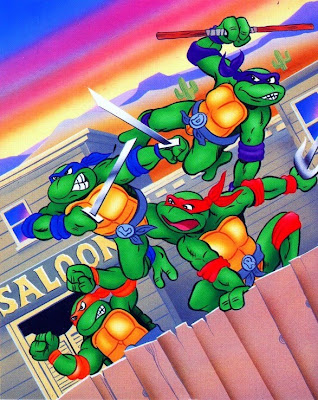 I was sitting on the stairs nursing a Coke and a hangover when the bell went and several hundred kids poured out of assembly like Genghis’s horde. The hangover was Leo’s sister Lucy’s fault. The kids went around me in two waves. I noticed the furtive sidelong looks, full of crafty young speculation. They looked like bundles of twigs in short pants.

One of them stopped in front of me. Genghis himself, all forty-two inches of him. The horde went into slo-mo. “Are you him?”

He nodded, satisfied. The horde drained away. They had established what they needed to know. Sometime that morning, between reading and sums, they would get to hear about something they actually cared about. Because the Turtle guy was here.

They were called the Teenage Mutant Hero Turtles in Britain. Ninja were banned because some government busybody had decided the very word might incite kids to tiptoe around in black balaclavas and slit each other’s throats. We also weren’t allowed to show Michelangelo’s nunchaku. Back in the ‘70s, a kid in the UK hit another kid with two sticks tied together with rope. Consequently nunchucks were considered a deadly weapon. Unlike the katana, sai or bo, obviously.

How it started: the editor at Random House Children’s Books phoned me up. “Dave, we want to do a series of books for 8-10 year olds. Have you heard of the Teenage Mutant Ninja Turtles?”

What did I know? Eastman and Laird had taken the $10 million check. Whatever the TMNTs used to be, they were now the next must-have action figures. And lunchbox. And bedspread.

Whoever made the movie hadn’t been told. That was a dark, bloody affair of revenge in which Raphael got beaten to a jelly. It was a story taken straight from the comics but it wasn’t going to play well on a Saturday morning alongside Scooby Doo. So I rolled off four kid-friendly plotlines and wrote them in a week each. Nice work if you can get it – especially when Random House in the States paid me for the stories all over again. That was gratifying, but not half as gratifying as seeing ninja back in the title.

The editors told me I was the only writer outside the US authorized to come up with completely new TMNT storylines. I doubt if that was true, but I appreciated the flattery. The penny dropped when they came calling for an adult novelization of the movie. “Can you send over a video?” Uh-uh, all they had was the script, which came on a bike that same morning. I read it over lunch and called them back.

When I finally got to see the movie, there was a whole flashback sequence concerning Splinter’s origin that had never made it off the page. Rightly so, as it would have bogged the movie down, but if you track down a copy of the novelization you can read all that stuff. Stretching a screenplay to novel length is never easy, and I was glad of all the padding. I also tuned up the cricketing jokes. The scriptwriter had put, “You have to eat scones if you like cricket.” Oh, come on, cricket is a gift to a gag writer. Silly mid-off. Googlies. Howzat! And all he could think of were scones?

Back to school. The teachers brought them in class by class. Each time I’d show a video of the TMNT song by Partners in Kryme. The teachers winced through that with teeth gritted in a big smile. And gradually my hangover lifted as I chatted with the kids. What the teachers didn’t get was that this wasn’t just about a movie or a TV show or the toys the kids wanted for Christmas. The Turtles were one of those concepts that sets a spark inside kids’ minds and fires their imagination. About everything. They barraged me with questions: What were the costumes made of? How did the actors do martial arts inside them? What was green screen? How were cartoons made? What was a katana? Did turtles really live in sewers? How do you know if you’re a mutant?

By the time Lucy came to fetch me for lunch, I remembered why I did this. Because the stories you tell kids aren’t just a way for them to while away a couple of hours. Those stories are the beacons that draw them into the wider world, thirsting for knowledge, excitement and understanding. Even stories about green teen crimefighters? Especially those.
Posted by Dave Morris on Saturday, October 16, 2010