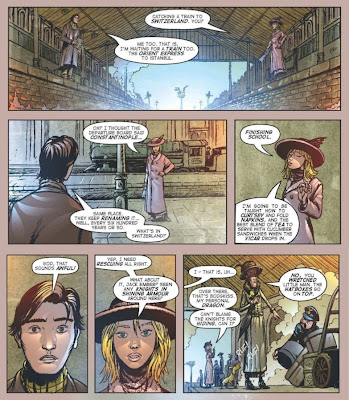 You can go haut cuisine:


BERGMAN
You should’ve popped the girl... Look.(PICKS UP A SHEAF OF PAPERS FROM HIS DESK.)This Swiss thing? After how long we waited?

BERGMAN
I was a publisher, man, I'd publish the plans. It's the Mona Lisa.

MOORE
You're too kind.

BLANE
Why don't you publish the plans?

BERGMAN
Yeah, no, I'm saying, that's what I would do if I was in the book business. Unfortunately I'm a thief, so I have to do that thing.


TIDWELL
Show me the money. Show. Me. The. Money.

Today for National Graphic Novel Writing Month we’re talking about dialogue. Howard Hawks used to work with his writers Ben Hecht and Charles MacArthur on what he called three-cushion dialogue. Never simply, “You’ve fallen in love,” but rather, “Now you break out in monkey bites!”

That part is the poetry of dialogue creation – and poetic is the word, even when it’s the stern, brass-knuckled poetry of the street:

“If you give this nimrod fifteen hundred bucks, I’m gonna shoot him on general principle.”

I write the plain unadorned English of my characters’ dialogue and then I spend a few days finding the poetry, the oblique way to say it: “I’m staying neutral” becoming “I’m Switzerland, baby” and stuff like that. You need to know each character’s voice and also the overall tone of the whole piece. Mamet writing Heist (where the quote at the top came from) is not the same as Mamet in Edmond or Redbelt. You're not looking for any old oblique way to say it, you're looking for the right way for that character to say it. Sometimes, "I'm staying neutral" is all you need.

Poetry doesn’t have to mean baroque complexity. Writing for the page rather for the ear, you’re not going to want to go the whole Mamet. Keep it simple almost all the time. That way, the parts where you want to take off and soar will have more impact.

Before you get to how a thing is said, you have to decide what is said. And here it helps if there is a good story reason why a character can’t or won’t just come out with exactly what’s on their mind. This is where the subtext of a conversation comes in. Subtext is interesting to the reader because, firstly, it’s more true to life. We rarely say exactly what we mean. And secondly, when we do say exactly what we mean it’s because we’re in a situation of zero conflict, and those situations don’t belong in your story unless it’s right before where you type “The End”.

In the movie Dean Spanley, there’s a scene where the main character, Fisk, is trying to talk to his father about Fisk’s brother’s death in the Boer War. Instead, the old man starts talking about the dog he lost when he was a boy. This is a safe outlet for his real deeper feelings about the son killed in the war. The great thing about this is that it’s not only a plausible surrogate expression of the underlying emotion. Because of the canine connection, it feeds into the bigger picture of the movie too - which is, of course, about a man who remembers his life as a dog.

Dialogue subtext is at its most powerful where a character’s own fears or the pressure of social conformity prevent them from saying what they really mean. Watch a movie like The Remains of the Day or The Wings of the Dove, where the tension in even a simple talk scene is often nearly unbearable.

But another type of subtext readers respond to quickly is when characters are speaking in code. Take this scene from The Third Man, by Graham Greene, in which Martins and Popescu are having a very direct conversation in front of the audience at a literary talk, who think the conversation is about something else entirely:

POPESCU
Can I ask... is Mr Martins engaged on a new book?

MARTINS
It's a murder story. I've just started it. Based on fact.

POPESCU
Are you a slow writer, Mr. Martins?

POPESCU
I see you are doing something pretty dangerous this time.

MARTINS
Should I make it all fact?

MARTINS
I'm too far along with the book, Mr Popescu.

POPESCU
Haven't you ever scrapped a book, Mr Martins?

And you can use subtext also to express the central idea of a work, as in this opening scene of William Goldman’s Butch Cassidy and the Sundance Kid:

BUTCH
What happened to the old bank? It was beautiful.

BUTCH
That's a small price to pay for beauty...

More on writing dialogue for graphic novels on the Mirabilis site. And read these general dialogue tips on K M Weiland's Wordplay blog.
Posted by Dave Morris on Sunday, October 10, 2010