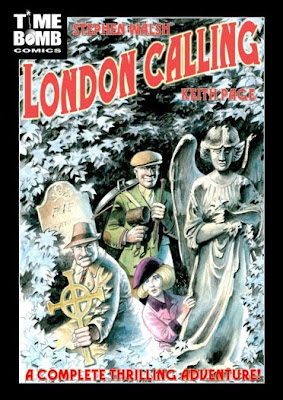 My wife Roz, in addition to being a million-selling ghostwriter, runs a thriving blog called Nail Your Novel, where she dispenses advice on the craft of writing. Most of the discussion there is about novels and screenplays, so I thought it might be interesting to see what Roz makes of a comic book. She certainly fits my definition of a casual reader of the medium as, while she might accompany me to the local comics store, she couldn’t find her own way there without a map and she won’t actually cross the threshold unless I drag her inside, preferring to poke around in the dress agency down the road while I’m sorting through the latest Dark Horse and Vertigo titles. Anyway, without further ado or indeed any ado whatsoever, here is what she made of London Calling by Stephen Walsh and Keith Page:

In a London flooded so deeply that nothing below the dome of St Paul’s Cathedral is showing, a woman paddles a boat. She tells her three child passengers a story about Charlotte Corday, a French psychic agent who was sent to London on a secret mission. And so we flash back to the meat of the story. It’s the 1950s. Corday is newly arrived in London, waiting for further orders about her mission and avoiding a number of unsavoury folk who seem to know more about why she’s there than she does herself.

Ultimately the mystery is about vampires, which I thought was a pity. Perhaps it’s just me, but I don’t find vampires as interesting or original as many of the other ideas that were casually slipped in just for atmosphere.

But the strength of London Calling is not the story. The real fun is the richness of the world, drawn in a boldly inked black and white style with plenty of retro drama.

It seems to have diverged from ours around the Second World War, when Winston Churchill used psychics to tell him what Hitler was thinking before he thought it himself. Walsh and Page have had a lot of fun taking recognisable elements of London - both fictional and factual - and reweaving them into a punkish world of their own. Many ideas are used as throwaway textures in the background - for instance, Quatermass’s alien discovery is fact and Martians stride around central London against recognisable buildings such as the BBC headquarters in Bush House. Charlotte gets some of her orders when a TV puppet called Dennis the Donkey speaks to her from her landlady’s TV set (and, with fairytale humour, tells her switch off and to go to bed).

Charlotte herself is a likable and distinctive guide to this world, alienated by her Frenchness and harbouring a breezy disdain for the foes she meets. Her superiority and plain speaking in the midst of the madness is reminiscent of Lewis Carroll’s Alice.

Despite the slightly pedestrian vampires, it’s a charming and likable romp. London Calling is published by Time Bomb Comics. Walsh and Page have continued the adventures of agent Charlotte Corday in The Iron Moon published by Print Media Productions. 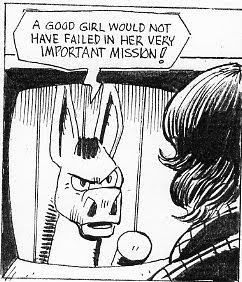 London Calling doesn't seem to be available on Amazon, but you can buy it direct from Time Bomb Comics. For comics cognoscenti, there's a longer review on the Forbidden Planet blog, and you can find out what artist Keith Page is up to (The Soho Devil with Christopher Fowler - looks intriguing) over on his blog. The Iron Moon is on Amazon (UK only) with the further - or earlier, or parallel - adventures of Charlotte Corday:
Posted by Dave Morris on Tuesday, March 29, 2011