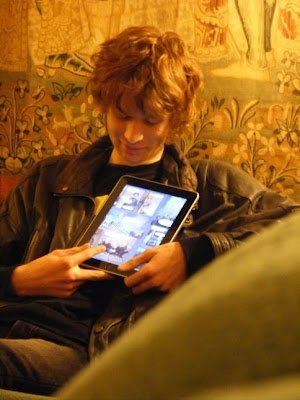 Our tech genius, Simon Cook, just got back from vacation and barely had time to throw off his coat and brew up a cuppa before he was hard at work fixing the hitch we had with version 1.1 of the iPad app.

Apparently it was a pesky one-line bug that meant the update didn't know where to find issues of the comic. But that's all fixed and the new version (which we're labeling 1.1.1) will be up this week. When you get it, you just have to Restore your back issues and they'll reappear like magic, as ably demonstrated in the photo above by the dashing Mr Fin Hartas, who is just back from orc-slaughtering and mead-carousing with Leo at the Dumnonni live action roleplaying weekend.

In a week or two we'll be announcing the publication schedule for issues #10 through #13. That's got rakshasa, robots, Bifrost, Babylonian sphinxes, fairytales as dark as Russian bread, and not one but - count 'em - two undersea kingdoms. And wait till you see Jack in his Hulk pants. All coming soon, so don't go away.
Posted by Dave Morris on Tuesday, May 03, 2011