Merlin and the motor car 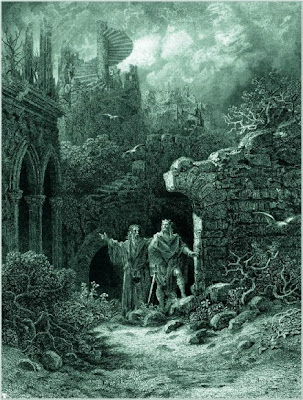 The collected correspondence of the Royal Mythological Society comprises more than fifty fantasy tales involving such thorny issues as what to do with a miniature civilization discovered in an Oxford professor's rooms, whether to blow the Gjallarhorn on the Last Night of the Proms, and how to pot your husband if he should happen to turn into a plant. Or, as here, whether you should sell a used car to the court wizard of Logres...

I don’t know how you feel about the motor car. I am a founder member of the Automobile Club of Great Britain, and during the summer we often get ourselves out for a bit of a race, all in fun really, with a pub lunch in the middle.

Yesterday, I was just in the first leg of a race from Wilmslow to Nottingham and I had a bit of trouble getting started, so I was at the rear. No sign of the others but their dust, and there at the side of the road as the dust cleared I saw a queer old duck who was waving at me to stop. You don’t know if he might not be in trouble, do you, in a case like that, so even though I didn’t like the look of him, I pulled over. You know that picture by William Blake of God? He looked a bit like that, only with a long robe and a staff.

Blow me down if the fellow didn’t offer to buy my motor car. Right there in the road, just as if he was asking a light for his pipe. He didn’t have a pipe, but you know what I mean. I’m in a rally, I told him; no time for tomfoolery. He had something to say about that, but I didn’t catch it because I was off on my way again.

But not for long. An official at the next checkpoint waved me down and gave a disqualification. Never mind what for; it wasn’t fair, that’s all. So I turned around, went off back down the road, and there’s the old chap with the beard. I’m still interested in that horseless carriage, he says, and this time he shows me a purse. I say a purse; it was more of a sack really, and bulging with jewels. Or perhaps it was my eyes that did the bulging.

It was only a couple of miles to walk home, and you don’t get shown a fistful of diamonds every day, so I drove the old chap to a cave that he pointed out. You don’t want to keep it in a damp place like that, I said. Drive right in, he says, and it’s his money, after all, so I put the lights on and down we went. I had my hand crank beside me; he seemed a frail old chap but you can’t be too careful. But when we got down to the cavern I could see he was on the square. The place was full of knights, the armoured sort, all sleeping in a circle – a hundred of them at least. And beside about three-quarters of the knights stood a horse, asleep on its feet as they do. But the rest of the knights all had a motor car parked at their head.

Seeing me taken a bit aback, the old fellow asked how many horsepower had my vehicle. Twelve hp, I tell him. There you are, he says, you can see why we’re modernizing. And for ten rubies as big as eggs I sold him my car. What do you think about that?

Dr Clattercut replies: I used sometimes to enjoy a ramble in the countryside, or perhaps a picnic, but the era of the motor car has spoiled all that. One might as well take a stroll across a battlefield in the middle of an artillery barrage.

Prof Bromfield: Oh, I don’t know. You’re such a stick-in-the-mud, Clattercut. If I were ten years younger, I think I might put on the leathers and a pair of goggles and give this rallying a go. Great fun. And the notion that, in England's hour of need, the Lord of Camelot and his knights will ride to lead us at the wheels of 12 hp Daimlers… Splendid!