There's so little really good writing on UK television these days that when we come across something exceptional it's worth shouting about. Here's an example of some very clever writing by Charlie Brooker from his disturbing SF series Black Mirror. (Regular readers will know that "disturbing" is a compliment around these parts.)

In an early scene in “Be Right Back”, the opening episode of season two, Ash and his wife Martha are moving into the house where he grew up. Ash tweets a photo of himself as a kid and Martha comments that it’s sweet. He tells her that it was taken on the first family trip after his brother died. They went to a safari park and “there were monkeys all over the car and nobody said anything.” The smile in the photo was fake, he says, but Martha says that doesn’t matter; his mother didn’t know that, and that’s why she kept the picture on display. That leads Ash on to talking about how his mother took down all his brother’s photos when he died. And the same with his father – “They all went up” (to the attic).

I'll come back to what's so good about that scene, but first let's look at how Brooker handles the nuts and bolts of plot development. This is going to get spoilery, by the way, so go and watch the episode first. Ash is killed in a car accident. Martha is told about a service that helps people to deal with grief by giving them a simulated version of the deceased to talk to. The simulation is based on all records the dead person left – social media, emails, blogs and so on.

A lot of that will have been in the publicity copy for the episode. It would be hard to come to it without already knowing that it's about a wife who deals with her husband's death by getting an AI simulation of him. So how does the writer get us to go along with that without just seeming to go through the motions? The base-level technique is always resistance; if the character resists, the viewer is forced to root for the change. So, naturally, when first told about the service she refuses to listen. Her friend signs her up and she gets an email from “Ash”, which she immediately deletes. But Brooker is too good a writer to let resistance carry us through on its own...

Martha discovers she’s pregnant and, unable to reach her sister, she logs on just to tell “him” the news. She finds that consoling enough to agree to talk to him on the phone after uploading private emails and other documents to help round out the simulation.

Leaving the surgery after an ultrasound scan, she drops her phone while playing the baby’s heartbeat to the Ash AI. Of course the AI is in the cloud, but the broken phone scratches open that raw wound of grief. When she gets home and can speak to him again, she agrees to move “to the next level” – an android body into which Ash’s simulated personality is downloaded.

Notice how each step in this progression is tied to the secondary plot development: Martha’s pregnancy. Without that, we’d just go cycling through the stages of the relationship from text to speech to physical body. Even with token resistance from Martha, that would feel like jumping through inevitable hoops. But the even more predictable progression of the pregnancy grounds the current of expectation, so that the consequent development of the relationship with the Ash AI (right up to a kind of home birth in the bath, incidentally, to get the android started) feels uncontrived. 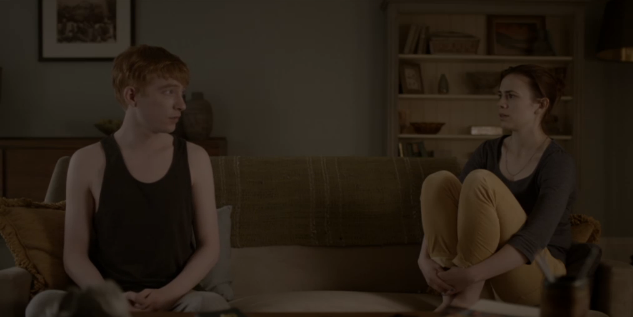 Back to the first scene. A great scene is always loaded with meaning, and this one achieves a number of things with subtlety, economy and clarity. First and most obviously, it shows us that Ash is very active online; he’s barely in the house before he’s tweeting the photo. But that’s just a plot set-up for later. More importantly, the scene introduces the theme of how to deal with grief. “Nobody said anything,” and the photos that were packed away in the attic. From which it’s clear that denial is regarded as unhealthy, and the drama that follows will explore the diametric opposite: keeping the deceased in your life.

There’s also a story seed planted here. Does it matter that young Ash’s smile was faked for his parent’s sake? Martha thinks not, and she’s about to have a relationship with an android who is faking its whole identity for her sake.

Finally, the scene foreshadows the very end of the story, where we come back after the birth of Martha’s daughter to find out what she has done with the Ash android. He’s in the attic, just like those photos.
Posted by Dave Morris on Monday, January 05, 2015