Martin's mum and the banshee 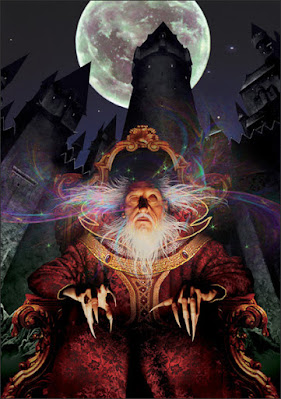 I've just learned of the death in September 2020 of Martin McKenna, a friend and colleague on many projects besides Mirabilis, including Warrior Kings and Frankenstein's Legions. I'm going to write at length about my memories of Martin, but that will take a while -- the term is over-used, but he was unique. In the meantime, I wanted to share something he told me which shows his love of the strange. He was no more superstitious or religious than I am, but we both enjoyed stories like this for the real magic in them. Not magic that's real in the way a table or chair are real, that is, but the much more vital and wonderful magic of the human imagination.

“This little story was told to me by my mother during a week’s holiday that she and I spent at South Foreland Lighthouse, a decommissioned light on the White Cliffs in Kent now run as a holiday cottage by The National Trust. We were there just before Christmas 2007. It wasn’t entirely ideal, as it turned out, because my elderly mum found the place a little too dark and isolated for her liking and she felt a bit uneasy at night-time, surrounded as we were by pitch blackness. This was my first surprise as I hadn’t expected her to be at all bothered by anything like that, having been born and brought up in darkest rural Ireland in the 1930s, and in fact had expected her, a country girl at heart, to enjoy escaping from London to the peace and quiet of this isolated bit of coast while being safe and cosy at the lighthouse; it really was a lovely spot for a quiet holiday, I thought. Added to this was the association the place had with my eldest brother, who had been stationed there during his career as a lighthouse-keeper.

“Trying to analyse why she sometimes felt unsettled in the place, we chatted about it one night in the lighthouse kitchen and our talk unexpectedly turned to the subject of ghosts. This was my next surprise because throughout my life my mum has always been sceptical about supernatural things, and would always derogate any talk of such stuff. She admitted that the stretch of coast where we were staying felt haunted to her - with its long history and hundreds of shipwrecks (‘All those drowned souls’) right on our doorstep as it were – and this was what made her uneasy at night. I was amazed, especially when she followed this by saying, ‘I’ve seen ghosts and things, when I was younger’. She was very matter-of-fact about this, and following my incredulous reaction of, ‘You have?! What like?’ she said simply, ‘Of course, Ireland’s full of that sort of thing; and I saw a Banshee’.

“Hearing this from my own mum was remarkable, as I’d never heard her talk about anything like this before, let alone the Banshee which is one of my favourite creatures from Irish folklore. This was bizarre! Of course I asked her to tell me everything about it.

“To set the scene a little, my mum grew up in County Monaghan in Ireland, in the sparsely-populated rural community of Aughaderry. The nearest actual town was (and probably still is) Aughnacloy over the border in Co. Tyrone. Her local community as she describes it was very scattered, with farms and houses dotted about over a wide area, sometimes a mile or more between neighbours. As a youngster, my mum was always riding about this and neighbouring townlands on her bike, out on various jobs and errands for her parents from their farm. My mum reckons when the following took place she was aged about 13 or 14, which would’ve made it 1942 or 1943. While WWII was raging elsewhere, my mum was away on the bogs encountering spooks.

“It was getting near dusk, and my mum was riding home on her bike (all the ghostly sightings she described to me – there were about three or four others – were witnessed from this mystery-machine bicycle). She was riding along one of the lonely back roads in the neighbouring town of Killabrone, behind the house of a guy called Paddy Traynor. My mum remembers that he was a farmer who lived alone, and was known to the local kids because he had an orchard with fantastic apples which they’d always be stealing. Paddy Traynor’s house was on the ‘main’ road (still only a minor country road), and directly behind the house was a field, and at the bottom of that was the road along which my mum was riding that evening.

“At the point where the road bordered Paddy Traynor’s field it climbed a steep hill, so my mum was walking her bike up it as she was accustomed to doing every time she took that road home. From the road she could see over a hedge directly into Paddy Traynor’s field, beyond which was his house. What my mum saw and heard then was very odd. There was a strange woman in a floor-length dress walking about in the field, and she was screaming. The woman was walking to and fro across the scrubby, muddy field endlessly screaming, and screaming. As my mum described it, “It was a terrible strange cry, not like a normal scream, more like a fox or something”.

“I asked her to describe the woman, and she said that she remembers the long skirt, and that her long hair was all tied back and ‘like straw’. But my mum couldn’t recall the woman’s face, or what sort of age she might’ve been; pointing out that that day was more than sixty years ago. Besides, my mum didn’t hang about; this screaming, pacing woman understandably frightened her, and without another soul anywhere in sight, she quickly hurried on up the hill to get away home. She left the woman behind her, screaming in the field in the dusk.

“When she got home she told her mother what she’d experienced, and her mum – my grandmother – very matter-of-factly said, “Oh, you saw the Banshee. That means someone soon is going to die”. Sure enough, within two or three days they heard the news of Paddy Traynor’s death.

“This all struck me as remarkably odd, and I quizzed my mum for further details to help fill in the gaps. Most importantly, this strange screaming woman was a total stranger, and this was unheard of in that neighbourhood at that time – it’s not like she might’ve been some upset relative or neighbour of Paddy’s, or a traumatized survivor of a nearby accident or some such who’d wandered into Paddy’s field; or a patient who’d legged it from some nearby asylum. Folk really didn’t travel far, and outsiders were rarely if ever encountered in those days in that part of the country, apparently. My mum maintains that it was unheard of for strangers to just turn up in that neighbourhood without everyone else knowing, and no-one ever spoke of seeing any unfamiliar woman going about the place (screeching or otherwise), so no plausible scenario seems to explain this woman’s presence.

“Strangest of all of course is the coincidence of Paddy Traynor’s death, just a couple of days after this ‘Banshee’-like figure was in the man’s field outside his house. From what my mum remembers, Paddy Traynor lived alone, was aged around 40, and as far as she can recall died of natural causes.”
* * *
It's too early for the card below, which Martin titled "Harpy Christmas", but just this once let's waive the rules. 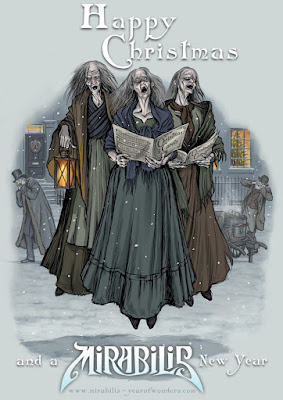