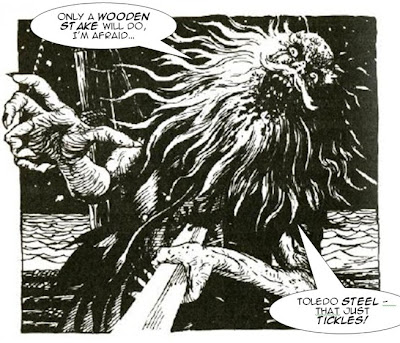 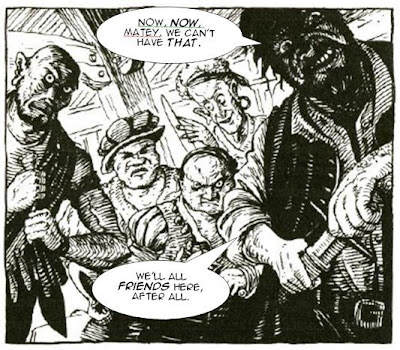 For the sake of completeness, here's another of the comic strip concepts that we pitched to David Fickling in the early planning stages of the DFC.
In a parallel universe you are reading the blog, not of Mirabilis: Year of Wonders, but of Down Among the Dead Men, a rip-roaring pirate fantasy adventure. Here's the guff from the pitch document. I hate writing this kind of hyped-up summary btw - just seems so fake if you're not actually a foot-in-the-door Glengarry Glen Ross type of guy - which I'm certainly not: 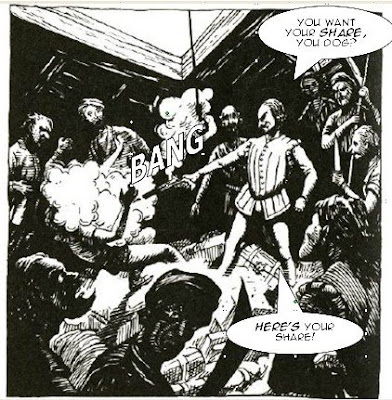 Orphaned in a pirate attack, Angel Bones has grown to young adulthood aboard the Belle Dame, captained by the dreaded Captain Skarvench, most evil man ever to raise the Jolly Roger.

Greed and plunder, black powder and blood - this is the only world Angel has ever known.

Pursued by Skarvench, our plucky band of heroes are sucked into an adventure that will see them cross swords with sea-going vampires, pit their wits against the wiliest wizards, and take flight aboard a galleon powered by moonlight.

Whether they like it or not, they must thwart Skarvench’s most evil and blackguardly scheme ever - to kidnap the beautiful young Queen Glorianne and hold her to ransom for a million gold doubloons.

A daunting task for any youngster. But wait - didn’t we say? Angel Bones has a secret no-one knows...

Angel is a mermaid.

Too Cap'n Sparrow for you? In fact the story was based on a gamebook that Leo and I worked on back in 1993, when Pirates of the Caribbean was still just a fairground ride. Not that that makes any difference, of course. By the time we came to pitch it as a comic strip, this particular mix of spookiness and swashbuckling was no longer looking as fresh as it had done.
I'm happy we went with Mirabilis because I think it's a stronger story, but Dead Men would've been fun too.
Posted by Dave Morris on Monday, March 23, 2009

Email ThisBlogThis!Share to TwitterShare to FacebookShare to Pinterest
Labels: creative process, Down Among the Dead Men, gamebooks, pirates