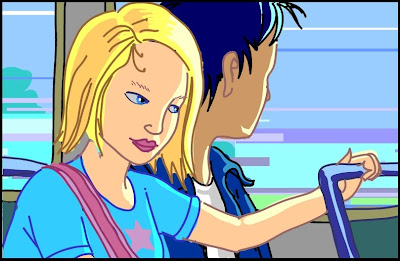 This is from a project Leo and I worked on in about 2001 called Dilemmas. It was an interactive animated TV show about a teenager called Cathy who would often break the fourth wall by turning to ask the viewer for advice.

Dilemmas arose out of adventure games, but it always annoyed me the way those would focus on things like whether you could stack up the crates in the right order to reach the rope that you could tie to the hook... and so on. Those are the least interesting elements of any story! The interesting choices are the personal ones: white lies, temptations, keeping your promises, etc.

Not that Dilemmas was about picking the right moral path. That's just another kind of puzzle set by the designer: "You score 5 Niceness Points". Bah. Rather, you had to build a relationship with Cathy. She would almost always take your advice (unless it was really dumb) but the outcome often depended on judging the course of action that suited her character best. She was actually quite an effective liar, for example - though she didn't always feel good about it, and that would have an effect too.

Some of the outcomes might appear better or worse, but whatever you suggested for Cathy to do, you'd get a story. There was no fail-and-start-again stuff. And she remembered the advice you gave her, and whether it got her into trouble, so there was that sense of advising a friend rather than steering a puppet-like character around.

Trouble is, Dilemmas was targeted at 9-12 year old girls - not, in 2001, considered a very big potential games market. And it suited a style of play where a bunch of viewers would sit watching on the sofa, calling out suggestions or letting Cathy get increasingly impatient till she did something off her own bat.

Back then, not a chance. But in the post-Wii era, who knows?
Posted by Dave Morris on Thursday, November 26, 2009