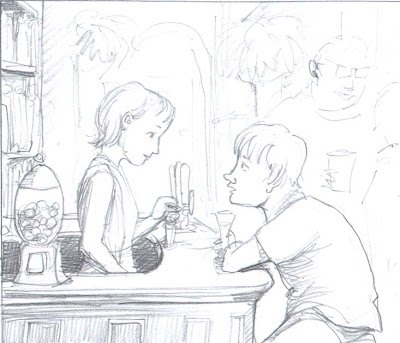 Just back from a short break in the decidedly 18th century atmosphere of Beckford's Tower in Bath. Leo and Jo came over for a day, and while strolling around town we came across some copies of one of our old books (Game Guru: Strategy Games) which we offered to sign for the bookstore owner. I don't think he realized the extraordinary coincidence of both authors being together in Bath, but he was happy enough for us to do it. I did warn him it might reduce the eBay value.

Anyway, that got me thinking about writing (what doesn't?) and I spent the following morning drafting a scene from Sweet. (Note to self: look up the definition of "holiday".) The scene ended up being one of those slightly arch, dialogue-heavy bits beloved of English scriptwriters. You know the kind of thing, Ealing comedy by way of Tarantino: a gangster chucks his wife's lover out of the bedroom window, then picks a chocolate from the box on the bed and says, "You always were a bit too partial to soft centres." Only not that, obviously, 'cause only Guy Ritchie would mistake that for a rom-com.

The UK Film Council even used to have a glaring example of this kind of writing on their website, and normally I can't stand it. Yet there I was, steeped in Gothic atmosphere (that's the 40 Watt bulbs), turban in place and glass of tokay on the ebon pedestal at my elbow - but instead of penning a 3000-line narrative poem about far Araby, I find myself writing dialogue for Arthur Mullard. I'm going to use it anyway. I asked my Muse for something very different from Mirabilis and this is what I'm being fed. It'd be churlish to turn it down.

The picture above is nothing to do with all that, but it's some more early concept work. These characters have yet to take shape but I may as well show you the whole process including false starts.
Posted by Dave Morris on Wednesday, November 25, 2009