Rounded with a sleep 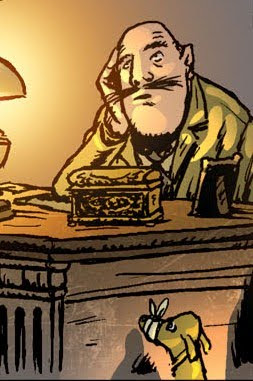 Mirabilis has been my main writing project for almost two years now. In that time you get awfully familiar with your cast of characters. Now, as we're tying up the Winter book, I'm finding it a bit of a wrench to say goodbye to this extended family. If this was Marvel in the early '70s, I'd run a 5-page origins feature in the back of the book and give each of them in rotation a chance to tell their story. But space and time allow only these potted biographies from the Mirabilis site.

George Edward Sacnoth Meadowvane is the 9th Baron Deerdand, whose ancestral home is Dunsayn Manor near Dorking. On first meeting you'd take him for a typical bluff, whisky-nosed English aristocrat in leather-patched tweeds with a shotgun under his arm. But Lord Deerdand has a poet’s soul buried deep in all that upper-class upholstery. For years he has been the principal patron of the Royal Mythological Society, and after spending most of his money on them he is now in danger of having to sell the family estates. (You don't notice the autobiographical elements when you're dreaming these things up, honest.)

About Toby it is harder to say much, but I can tell you that I think he's probably a good dog at heart but has made a poor choice of mistress in the sour-spirited Miss Bodgkiss. A bit like Toad working for Magneto in the Brotherhood of Evil Mutants, 1970s vintage.
Posted by Dave Morris on Sunday, November 15, 2009