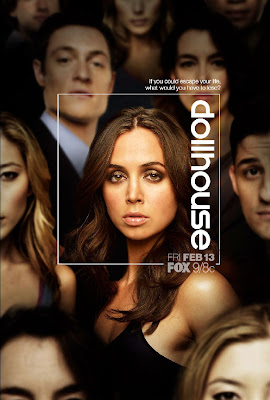 Maureen Ryan has an illuminating in-depth interview with Joss Whedon on the Chicago Tribune site. They're mainly talking about Dollhouse, his recently-cancelled show about operatives whose minds are blank until they’re imprinted with the personality and skills required for an assignment. (And if that suggests Joe 90 sitting in the Big Rat, put the image right out of your head; what Echo gets up to in Dollhouse would really steam Joe's bins.) After a couple of early episodes that make you suppose the show is going to settle into a comfortable weekly mission format, Joss takes it off in a whole strange, murky and kinky direction. And then at the end of season one it suddenly goes off the map into totally unexpected territory.

The bit that really got my attention was when Joss starts discussing his plans for more internet projects along the lines of Dr Horrible’s Sing-Along Blog, which has parallels with how Leo and I would like to build up an audience for our comic projects:

Ryan: When I was soliciting questions for this interview, I kept getting, "Why isn't Joss Whedon going to cable or just going off and doing his own Joss Whedon online portal or whatever?"

Whedon: Well I can answer both those questions - because Fox forgot to cancel my show. They looked on their calendars and went, "God, we were supposed to cancel this months ago!"

Nice to see that television networks also operate under the “idiocy of the system” method. Although by some fluke the system hasn’t behaved quite as idiotically as it does in other media, because Fox are after all allowing the show to run until the end of season two. Which is a lot more sensible than just filibustering a project and generally pissing off the people who created it until they wander off to do something else so that the publisher/studio/network gets to keep the biggest slice of an infinitely small pie.

Whedon: The Internet is slightly more interesting [than TV] right now just because I feel like we have to get in there and start figuring out how to create entertainment without the networks and the studios, because they’re basically trying to figure out how to create and entertain without us.

Ryan: Yeah, I think you’re right there, but as you say, it’s not easy to kind of create a new model for how everyone gets paid and makes what they want to make.

Whedon: Yeah, but people aren’t going to make what they want to make anymore. That’s not going to happen. The rainbow, the pot of gold at the end of the rainbow got smaller, significantly smaller. […] The artistic community is more and more left out of the equation, so the trick is going to be finding out how to make the Internet work in such a way that people [can get by] because it’s not going to pay TV money. It’s not. In fact, people are going to have to be entering the business less with the idea of making a fortune and more of the idea of just making product, getting it done, getting it out there and then hoping that there is a way in which it can support [a creative community].

If anything, book publishing is further along that curve than TV. People complain about novels “written by” celebrities, but the fact is that an author must first build a platform, as they say, or their opus will assuredly sink in the sea of books being published every month. A soap star is someone who has nailed that obscurity problem, and the fact that they can’t actually write is easily dealt with by bunging a relatively small sum at a ghostwriter. (That's the way producers and editors mostly prefer writers anyway - as hirelings.)

The problem is that ghostwritten novels with celebrity names on the cover will not produce the original content necessary to drive the whole industry onwards. So some genuine authors are still needed – not many, but some. However, those authors too have to build their platform to stand out from the crowd. Networks and publishers should therefore be delighted to see authors willing to strike out and take all the risks themselves on the Internet. Then they can offer sweet deals to the ones who bob up to the surface. It’s like being able to wait and see if a lottery ticket has won before you pay for it.

Anyway, back to Joss Whedon. All this has just reminded me that I still haven’t got around to watching Firefly. The hokey cowboy angle just keeps getting in the way. But I’ll try and get past that because Whedon’s TV shows are like Alan Moore’s comics: even the weaker stuff rewards your time. So if you’ve begun puzzling over Christmas presents, that could be your answer. Dr Horrible is a great laugh, Dollhouse is compelling and thought-provoking, and Buffy is just about the greatest body of work yet made for television. Go on, you won’t be disappointed – and, better yet, you’ll be helping Joss escape the clutches of the networks so he can go on to create even more original stories.