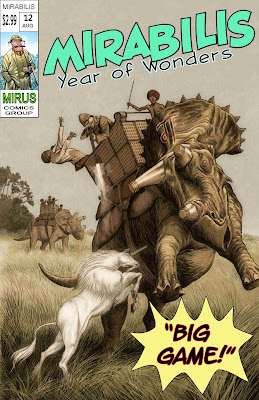 Here's our penultimate "Silver Age" comic cover. This one isn't very seasonal but tomorrow's will make up for that.

It's another of Martin's fabulous pictures that was intended to go in the gazetteer. He drew it after I'd had a grumble (well, let's face it, a rant) about people who characterize unicorns as sweet and gentle creatures. How soppy and boring compared to the medieval concept of a creature representing the very essence of priapic ferocity! So here's your proper unicorn - dangerous game indeed.

The symbol on the triceratops's frill is ga, the Āryabhaṭa numeral 3, which is typical of the meticulous research that Martin will do for a painting. So today's cover is dedicated to him.
Posted by Dave Morris on Wednesday, December 23, 2009