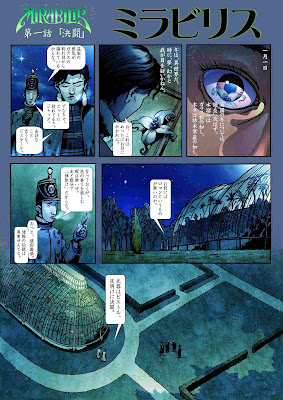 Sneak peek here of something we'll be unveiling on the Mirabilis website in a few short weeks: the whole of the 10-page opening episode, "Stung!", in Japanese. The translation proved to be nowhere near as straightforward as with our French version, and we have to say "domo arigato gozaimasu" to Keiko and Paul Mason for putting in the work required, not just to turn the English text into Japanese, but to figure out how to lay it out on the page. As Keiko notes:

"A completely manga treatment would be impossible as the artwork doesn't follow manga conventions. For example, it is pretty well de rigeur for a manga to display a close-up of a character in any scene where the character has strong emotion. Various bits of visual grammar will then be deployed to express that emotion (hence the huge twinkly eyes in most manga). But the Mirabilis approach is more Western, and in many cases more literary."

Whether there will be any appetite in Japan for a non-manga comic remains to be seen. But the Japanese reading public is pretty comics-literate (unlike some other island kingdoms we could mention) so we'll just have to see.

Meanwhile, our English-language episodes are still up - and watch out this Friday for "Shadows in Silver".
Posted by Dave Morris on Wednesday, January 13, 2010