The next nine Fridays Doh. If I'd thought about it, I should have numbered these as a countdown and put them up as a sort of Advent calendar thingy. Nice to see them all like that, anyway, and to dream of the parallel universe in which we're free to publish them as a monthly comic book. As a youngster, I used to gaze longingly at the covers of Creepy and Eerie advertised in the back pages of Famous Monsters of Filmland. Were those atmospheric covers by Frazetta just mood pieces, or did they actually illustrate the stories inside? In the absence of actual copies of the mags, my ten-year-old mind tried to conjure up tales that would do justice to such powerful images. But (the good news) you don't have to make do with DIY Mirabilis. Read on...

It's been three and a half years since we created our first episode for the dummy issue of the DFC, and over a year now since weekly instalments of Mirabilis began appearing in that late, lamented comic. There was a long creative development phase: Jack started out as a podgy kid in WW1 uniform, Estelle wasn't nearly as pretty, and the Kind Gentleman wore a walnut whip wig that towered higher than Amy Winehouse's beehive. Fast forward to 2010 and, all told, we've clocked up about 4 man-years of effort - not just in creating the 190 pages of the Winter book, but also the storyline for all four graphic novels, the standalone episodes such as "A Wrong Turning", and the Royal Mythological Society correspondence over on the main site. That's a whole heap of work, taking up a good chunk of our creative lives, and most of it self-funded into the bargain. And most maddening of all, it's work that has largely never been seen. Only ten episodes of Mirabilis ever appeared in print, barely a quarter of the first book. The rest sits now in a virtual drawer gathering digital dust.

Okay, so if you were a subscriber to the DFC you will have already seen episodes 1-10. But it's fair to say that the DFC didn't enjoy quite the best quality paper or printing, and some of the early episodes came out looking rather muddy. So we are going to be rolling out (as they say) those episodes on the Mirabilis website, a new one every Friday over the next nine weeks, starting tomorrow. Not only will you get to see the previously published episodes in a form closer to how they are supposed to look, you'll get to read on and see what happens after Estelle fell out of that train window. And to cap it all we'll be running at least one never before seen episode. Santa told us you'd been nice, that's why. 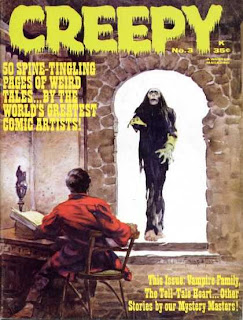