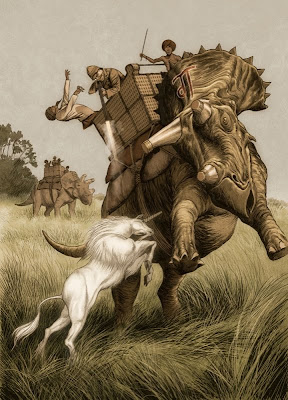 Here's another of Martin McKenna's spectacular illustrations that were originally intended for the Gazetteer. I wantonly vandalized this for use as one of our counterfeit Silver Age covers recently, but here it is in all its glory - because, although a firm believer that the future of comics is on mobiles and e-readers, I prefer paintings to have tangible form, and this, like all of Martin's work, really should be appreciated at full size emblazoned across two big pages of high-quality art paper.

As I mentioned before, Martin and I conceived the idea for this picture to set the record straight on unicorns, which in twee fantasy novels these days are too often reduced to rather soppy critters. Bromfield and Clattercut are of exactly the same opinion (funny, that) and here's their reply to a correspondent who wrote in with unicorn trouble:

To the rear of my country house there are fields bordered by extensive woodland, so that it is not unusual to look out in the early morning to find deer on the lawn. No doubt the poets would have words to describe the tug on one’s soul in gazing on such a beautiful sight, the doe and her fawns like wanderers from Eden in the golden dawn. It is sometimes all I can do not to fetch my gun and join in “with both barrels” – but my wife would not appreciate being woken in such a robust fashion.

A few days ago a still more breathtaking apparition awaited me on rising. It was a magnificent stallion, as white as a statue of marble, with a straight horn in the middle of its forehead. I reached out towards it, but with the merest touch of my fingertips on the window pane, it bolted into the fields and was gone.

But, gentlemen, this is not the only marvel I have to relate. For this morning I looked out from the window to see the unicorn had returned. And my daughter, still in her nightgown, was there standing in the dew beside it. Have you ever witnessed a unicorn taking grass from the hand of a young girl? It is more humbling than bagging a dozen rhinos.

Now I have conceived a purpose, and I would be grateful for your advice on how best to achieve it. For I have a mind to capture this unicorn, and tame it to the bridle. I fancy that I will excite quite a stir at the Old Berks when I turn up riding a unicorn behind the hounds!

Dr Clattercut replies: You will excite quite a stir too, my dear sir, when you are found dead on your lawn with a two-inch hole punched through you from sternum to spine.

Prof Bromfield: Quite so. Tame a unicorn? You may just as well attempt to put a leash on the Sirocco or teach Cleopatra’s Needle to dance the Argentine tango. I don’t know how the idea gained currency that unicorns are shy and gentle creatures, but I can assure you that nothing could be further from the truth.

Dr Clattercut: Consider Pliny’s words: “The most fell and ferocious beast of all is the Unicorn or Licorne. His body resembles a horse, his head a stag, his feet an elephant, his tail a boar. He loweth after an hideous manner. One black horn he hath in the mids of his forehead, bearing out two cubits in length. By report, this beast is so wild that it cannot possibly be caught alive.”

Prof Bromfield: There you are; I knew Clattercut would have an obscure quotation on the subject. On a more practical level, I can assure you that a unicorn is quite capable of killing an elephant with a single thrust of its horn, and nor would it be averse to doing so. Its amenableness towards your daughter is also cause for concern – though of a different nature, too delicate for me to discuss here – and I advise you to keep her indoors while this creature remains in the district.