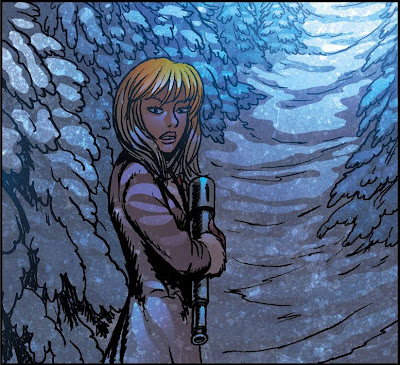 This blog is one year old today, and it's almost a whole year too since the comic folded. At the time, Leo and Nikos and Martin and I thought of starting up a new project. I'm glad that instead we went on and completed the remaining three-quarters of Book One and planned the outlines of all four books.

That was certainly worth doing on a personal level. I would have hated to have just left it there with only the first 55 pages that appeared in the comic. It feels to me as an author that you have a duty of care to your characters not just to abandon them falling out of a train window or whatever. Now at least I know that Estelle and her favourite telescope are safe in one piece and back on terra firma. That hillside she's climbing leads to danger, but when aren't you out of danger? Time enough to rest when you're dead.

With the 200 pages of Winter done - working on the books and the website and the blog being a full twentyfourseven proposition - we found that we'd got way beyond what you'd call "low on cash". Nice as it would have been to go on and complete the full 800 pages, passion alone could only carry us (and Jack and Estelle) so far. We had a company willing to finance the other three books. We had a company that controlled the rights. Unfortunately they weren't the same company. Doh.

So, even as the blog celebrates its birthday, we're having to turn our minds to other projects. They're exciting and they'll keep us busy in the months ahead, but there'll always be a special place in our hearts for Mirabilis. I got to work with some marvellous people: Leo, obviously, and Martin, and also Nikos and his assistant Mike Toris, and our extremely patient and capable agent Stephanie Thwaites, and the freakishly multitalented Frazer Payne, who provided the music for the Mirabilis trailer but could also probably have written, drawn and animated it while eating a tuna sandwich made with bread he baked himself. Our families too have helped, not least by putting up with baked beans when a new Wacom tablet or software licence took the money that was set aside for steaks, but also with their own creative input (thanks, Inigo!) and most of all with their love.

And, I have to say, the Winter book that we produced in our year of living frugally is absolutely gorgeous. I have the whopping great Lulu copy of it all beside me and if I have any occasion now to glance at a page for reference, it's hard not to get engrossed and before you know it I've read a whole chapter. The characters and the images and the colours are so fabulous. Yes, and the story too; it's the best thing I've ever written. But even more than the labour of love itself, I've had the privilege of working with all those great people. So when I raise my glass of champagne this evening, it will most of all be in gratitude for that.

Those of you who follow the blog have helped too, more than you can know. When one is working without any feedback from an editor or publisher, the sense of community that comes from readers gives a level of moral support that cannot be overestimated. So if anybody out there would like to take this opportunity to stand up and take a bow, and introduce yourself, and say what you like in comics or fiction generally, and even to plug your own blog - go ahead. We appreciate every one of you.
Posted by Dave Morris on Friday, March 19, 2010