Kissed by a bee 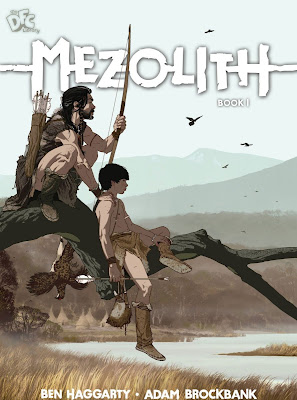 I was planning to hold off from reviewing Mezolith until it was actually released, but I got so fed up of waiting for Amazon to send my copy that I went back and read it in weekly comic strip form. And that's got me all geed up now, so here it is.

There's no need for a long review here. Others have written about Mezolith eloquently and perceptively, including Richard Bruton on the Forbidden Planet blog here (where you can also see a few pages) and a great analysis on The Book Zone (For Boys) here. There's not much more I can add to what those gentlemen have written except to say that Mezolith is a brilliantly original story: a loving biography of the human race told at the personal level through one boy's eyes. And it captures the whole timeless marvel of humanity, in that Poika is simultaneously the latest of many generations of his people, and at the same time a completely unique individual who is forming his own relationship with the universe, as we see in his charming connection with the bee that seems to become his particular totem, guide and rival.

But that's just detail. The point I wanted to make is that Mezolith is the most important British graphic novel of the last twenty years. A big claim? Look, I'm a huge fan of Watchmen, for example, but I know it's only ever going to be understood by comics fans; 99% of readers would be left baffled. But Mezolith, on the other hand - that's a timeless, engaging and yet unsentimental tale that anyone can read and appreciate. A French edition is already lined up for June this year, and that's only the beginning. It's not something to put alongside Tintin, it's something to put alongside Dickens or Steinbeck. Ben Haggarty and Adam Brockbank have created an honest-to-mankind masterpiece which you really should buy as a gift for any friend who appreciates the transformative power of great literature. No kidding. Button there at the right, Amazon will do the rest.
Posted by Dave Morris on Wednesday, March 17, 2010

Email ThisBlogThis!Share to TwitterShare to FacebookShare to Pinterest
Labels: MeZolith