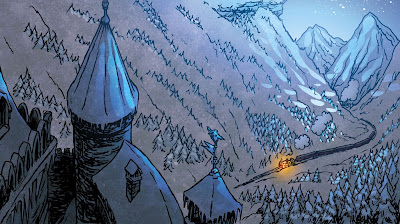 There are no more online episodes of Mirabilis planned, but we do still have a 200-page adventure all ready and waiting for you. What you've seen so far is barely the first quarter of just the first book. And, like Blondel searching high and low for the Lionheart, we're going to keep exploring ways to get that out into the world. One day.

In the meantime, keeping dropping by for updates on our other projects. It may still say "Mirabilis" at the top of the page but it's going to be about a whole lot more. We've got Sweet, a romantic comedy story in graphic novel form. The first 23-page instalment of that is already written and storyboarded, but of course it may take quite a while to do the artwork. If and when we have something to show, you'll see it here.

And there's Frankenstein's Legions, for which Martin and I have long been searching for the perfect storm to give it life. We just need to agree on the right medium. Videogame? Comic? Gamebook? There is already a prose novel, by the award-winning fantasy author John Whitbourn. While we make up our minds where to take it next, just glom onto that stunning image below and then zip over to PODgallery where you can buy it as a gleaming Giclée print.

And if you enjoyed the gamebook we gave away a short while ago, keep an eye out for a whole range of interactive adventures that Jamie Thomson, Mark Smith, Oliver Johnson and I have got planned for publication on e-readers. Fabled Lands is where you'll get all the breaking news on that.

The Fabled Lands Studio also has some plans to turn Fangleworths into a manga and, although that's very early stage and wouldn't directly involve me and Leo, it's still our baby and we'll be on hand to guide it along if it goes ahead. We might even do a series of Fangleworths books, Astrosaurs-style, to back it up - and those we would most definitely write personally. It's all a bit up in the air contractually, but we'll tell you more as and when.

And quite apart from all the above, Leo and I have been cooking up a completely new book series that we're almost ready to unveil. All that I'm going to say is that it's for boys and it makes extreme sports look like tiddlywinks. This series will have its own website and we'll tell you all about it very soon.

So, though 2010 may not be the Year of Wonders, it will nonetheless be a year of goodies! 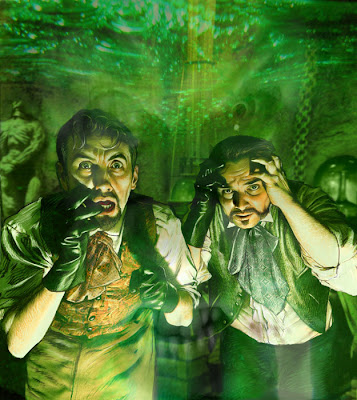