King's heirs sue to get the crown back 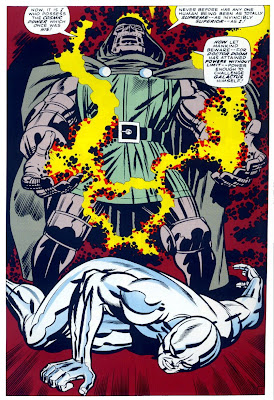 Passing a newsagent's window this week, my eye caught a display for Ben 10 bubble gum or ice cream or something. A couple of steps later, I backtracked for another look, because (by gum) there were the distinctive "black dots" which, for my generation, evoked the coruscating, pulse-pounding force of cosmic energy as depicted by the one, the only, Jack "King" Kirby.

I love the idea of modern artists using the King's visual signifiers in corporately created stuff that's designed to sell toys to kids. It seems like a blow for freedom, as though they're smuggling something sacred under the very noses of the marketing wonks who are jabbering about whether little Ben needs to be fifteen percent more relatable or whatever.

Even better news this week is that Kirby's heirs are making some headway in their attempts to recover rights in the characters and stories he created. It's ridiculous that they should have to go to the lengths of shelling out money to lawyers in order to get their demands even acknowledged, but that's the world we live in. I've been on that ferry ride myself, and after you pay the lawyers to unleash shock and awe, the corporation turns round and says well goodness, you didn't need to do that, golly we always meant for you to have a share in those rights all along, you never needed to get legal folks involved, blah blah. To which I can only add that the Kirby family have all my best wishes and I hope they do get control of those rights, for the simple reason that (I assume) their interest is personal as well as financial, and creative works are valueless if they're taken away from the people who have genuine passion for them.
Posted by Dave Morris on Tuesday, March 23, 2010