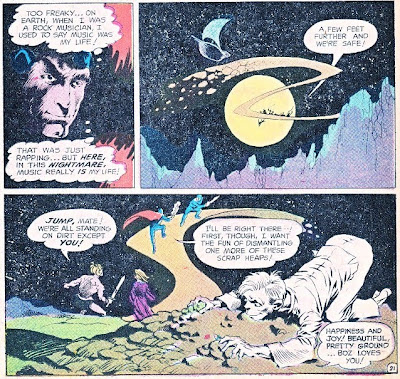 It was always Marvel for me, never DC. Well, I say that, but a Gil Kane Green Lantern or Infantino Flash could always tempt me. Oh, and Kane illustrated The Atom so that got added to the monthly stack too. And when Neal Adams started doing Batman and The Spectre, I was in line for those, of course. Let’s say, then, that Marvel had my heart but DC still got a good share of my pocket money. And never more gladly than when, in the summer of ’69, I strolled into my local post office at the back of Mayford village green and there staring back at me from behind the copies of Valiant and TV21 was a pristine copy of Bernie Wrightson’s Nightmaster.

Nightmaster wasn’t a new book. It was a three-issue run of DC’s Showcase title, which was occasionally worth a look as the writers and artists could try out some interesting experimental stuff they never would have got away with in the pages of Superman. Maybe DC rushed this out because they heard Marvel were working on Conan. Certainly it was the first time I’d ever seen the two great loves of my young life get together like that. I’m talking about comics and swords-&-sorcery.

It was to have been Wrightson’s first professional assignment. Al Williamson took him into the DC offices to meet Carmine Infantino (of whom, more here on the encyclopaedically informative Cloud 109 blog) who by Wrightson’s own admission terrified him. He thought that Infantino looked like “a really big Edward G Robinson”, spoke like a fast-talking cigar-chewing Godfather, and when the older man got him in a friendly headlock, 18-year-old Wrightson thought he'd soon be sleeping with the fishes.

Actually Infantino was a much more understanding and supportive fellow than his appearance and lofty career eminence would lead anyone to believe. When, after weeks of working in mounting unhappiness, Wrightson came back with a badly over-thought and lifeless interpretation of the first few pages of the script, Infantino reassured him that it happened to everybody. He put him in the hands of the equally legendary and gentlemanly Joe Orlando so that he could get started on short stories for House of Mystery and build his confidence there. (Did I mention that House of Mystery was one of my must-buys? Phantom Stranger, too. Yet, y’know, I wasn’t a DC reader as such. You couldn’t be a mod and a rocker…)

Anyway, after a few months of the short stuff, young Bernie was flying. In the meantime, the first issue of Nightmaster that had defeated him had been completed by Jerry Grandenetti and Dick Giordano (you see where he got those notions about the Mafia running the NY comics scene) but now Infantino deemed him ready to handle it. Wrightson took the assignment and, with copious behind-the-credits help from his mates Mike Kaluta, Steve Hickman and Steve Harper, he turned in 46 glorious pages of swinging sixties swords-&-sorcery. Denny O’Neil’s script is nothing to shout about, and gives every sign of being knocked off in a few days to fill a gap in a genre that O’Neil probably had no interest in, but there are still some fun touches. The ship that flies with moonbeams in its sails – well, I swiped that for Down Among the Dead Men a quarter century later. And vivid in the memory, even after so long a time, are the flying vegetables and the Oirish Conan wannabe, and the pretty rock-chick barmaids and poisonous green warlocks. Ten years older and I would’ve taken it with a spliff and, man, I'd have instantly got where O’Neil was coming from.

Swords-&-sorcery is not a part of the Mirabilis fantasy tradition. We consciously steered clear of it because the genre barely existed in 1901, apart from the dark Ico-like tales of swordplay from earlier Gothic writers or the more romantic Arthurian vogue stimulated by the Pre-Raphaelites. Heroic fantasy was still a long way from evolving in the hands of writers like Burroughs and Howard into the genre we think of today. There are some Arabian Nights sequences planned for Mirabilis season two, but I’m not sure if I’d call that swords-&-sorcery, and in any case I digress. Connoisseurs of that style of fantasy will find plenty over on the Fabled Lands blog, which this month is running a wealth of Kull- and John Carter-inspired science fantasy in the form of my and Jamie Thomson's Abraxas project.

As a Showcase title, I suppose we have to regard Nightmaster as a failure. The character made a few cameo appearances in other DC titles over the years, but he was clearly never destined for star status. Bernie Wrightson, on the other hand, has gone from strength to strength, and if he ever decides to take up the art duties on a Kull or Grey Mouser book, I’ll be right there with my pocket money waiting for the post office to open.
Posted by Dave Morris on Thursday, March 25, 2010