If the coin had come up tails... 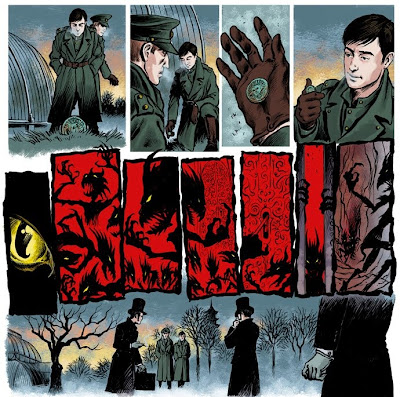 If you did a double take there, it means you are awake and sober. No, indeed that is not a page of Leo's and Nikos's art, but a true curiosity, pencilled by Russ Nicholson and inked and colored by Martin. It came about like this...

Years before Mirabilis appeared in Random House's DFC comic, we had been invited to contribute a try-out version of the first episode for their dummy issue. The artwork in that 6-page episode was all by Leo, including the coloring, and it was very different from Mirabilis as you will have seen it. For one thing, the army uniforms looked more WW1 than the dashing dragoon outfits we eventually (at Martin's urging, and quite right too) clothed Jack and Gerard in.

That was mid-2006, a long time before we actually got our very brief run in the comic. Sometime in autumn 2007, the excellent Ben Sharpe, editor of the DFC, asked us to come up with a bunch of Mirabilis stories to appear in The Guardian, a UK newspaper with a very shaky grasp of both epigenetics and spelling. David Fickling, the comic's publisher, didn't want these to be stories that would later appear in the comic. So I quickly cooked up half a dozen standalone stories, of which one became "A Wrong Turning" and Ben must have like them because he wrote back:

"I think they’re really great. Fantastic, actually. It’s not that we didn’t know that you were an accomplished writer, but to have conjured up all these little perfectly formed scenarios in one sitting certainly deserves the doffing of hats. I think these would be great for the paper – and also for the comic and the graphic novels, and etc, etc."

(Btw I've quoted that, not to fan the fires of my own ego, but to show what good taste and discernment Ben has.)

Now, Leo was still hard at work at a couple of books he was contracted to illustrate - and that was even before he could get going on the regular strip. So there was no way he was going to be able to fit in six 5-page stories on top of his other work. Oh, and did I mention these had to be done gratis? So we turned to Russ Nicholson, an old hand at the comics game and one of the many artists who did try-outs for the John Blake strip.

The only problem: I was still tinkering with the scripts and layouts, so I couldn't ask Russ to try out for our Grauniad strips using those. The only finished script to hand was the one from the dummy issue of The DFC, so we sent a couple of pages of that over to Russ and there's the result above.

It looks odd because the original plan for the DFC was to publish in Berliner format (31cm x 47cm) so the pages ended up having way too many panels. Fortunately that plan was abandoned. Much as I dislike the A4 format, it's certainly better for comics than Berliner! Unfortunately, another notion that got abandoned was the whole plan to put the standalone strips in the newspaper, because instead of appearing in the first issues of the comic it had now been decided to start Mirabilis in the Christmas 2008 issue. In the event, those DFC strips that did appear in The Guardian were, I think, then reprinted in the comic anyway, so it would have been a right waste of Russ's time to get him to do 30 pages of comic strips for nowt but a thank you.

Readers of the Fabled Lands blog will know that I'm a big fan of Russ's work. However, I don't think the style he went for there would have fitted alongside the uniquely atmospheric and warm style that Leo and Nikos created between them. In theory, the standalone strips didn't have to mesh with the main Mirabilis story, but there needed to be some sense of them belonging to the same tradition. As I've said elsewhere, Leo and Nikos remind me of the work of Guy Davis and Dave Stewart on B.P.R.D. - or maybe, if we're going back further into the great age of comics, of luminaries like Herb Trimpe, George Tuska and Marie Severin. The style Russ used is more of a traditional British comic look - Steel Claw, say, in Valiant. (Hmm, okay, the art on the Steel Claw was by Jesús Blasco, who was Spanish, but you know what I mean...)

Meanwhile, you may be wondering about that original 6-page episode in the DFC dummy issue. That should remain locked away in the vaults, I think. Like the original Buffy pilot, it served its purpose as a step in the development process. But here are a few frames for comparison with how the characters ended up - and, below that, the real deal as Jack and Gerard find the Kind Gentleman's coin. Leo's and Nikos's work never fails to thrill me. Accept no substitutes. 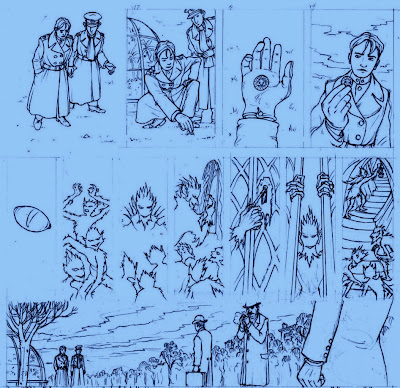