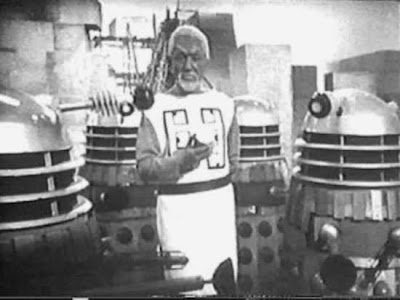 Well, I say it ain’t broke - but the voices, they’ve broken, haven’t they? Big and deep equals scary, obviously. We all know that, especially if we’re in marketing. And tall. Tall is threatening. Really, really tall. And big, like those Cybermen toys that sold so well last Christmas. When you think about it, why didn’t all the early Who team, people like Verity Lambert – why didn’t they get that? Big, tall, deep voiced. Like a Bad Dad. And easy to package so it fits on the shelves at Toys-R-Us. Golly, it’s a wonder the Daleks ever got going without ticking those boxes, isn't it?

That’s the committee view. It took one man to create the Daleks, and one man to design them, and after half a century it’s taken a committee to bugger them up. There are criticisms of the Daleks' brief off-screen appearance in the Paul McGann movie, but at least the producers of that understood what made the Daleks the best sci-fi villains of all time. Listen to them shrieking for the Master’s blood. They’re like angry children. Shrill, self-centered, hysterical. The Daleks are paranoid. They’re fanatics. You can’t reason with them. That’s why they’re scary.

I mean: why they were scary. Now that they’re big and gruff and pantomimey, you wait and see: the stories will all be about puncturing that pomposity. Don't worry children, there's no bully in the world that you can't see off if you just show him a bit of cheek. “Here’s a biscuit, I’m going to blow up your ship with it.” Rubbish - you can’t do any deal with a Dalek. You can’t say, “What do you mean?” and have it say, “I don’t understand.” They don’t engage with other life-forms that way (that’s their weakness, incidentally). They don’t bother with threats and boasts: “Pest control” – lazy writing, that; just prole-pleasing. To talk like that means you are engaging with the other person, that you have some inkling (and care) how he thinks. But it's when we come up against the wall through which connection cannot flow that, with a prickle of dread, we realize we are dealing with the Other.

The scariest thing about Daleks: they are untroubled by doubt. Put a floppy-haired schoolboy with a fake-blokey accent up against a Taliban theology student, see how much of a meaningful dialogue you’d get then. Turn the Taliban teenager up to eleven and give him a gun. Hate is all about fear. “Conquer and destroy”, geddit?

Look at what the Daleks were up to in The Invasion of Earth. Robotizing people, burning out their brains to enslave them. That’s creepy shit, man. Those little bastards were evil and relentless. Hate and fear were all they knew. Even the movie version, dumbed down and jokey, couldn’t help but deliver some real chills. Now we have “running to and fro" stories that are full of twaddle about DNA and empty threats and bloodlines and blowing up walking bombs and – yawn. It's like a Marvel crossover on fifteen double espressos. When did the Daleks cease to have a plan? When the writers ceased to have a clue.

It’s easy to knock the BBC. Well, it is if they make decisions on the basis of bone-headedness and greed. The new Dalek design was apparently imposed by order of BBC Marketing, who want more toys to sell. Allowing marketing to drive content is always a mistake (and, ironically, it's usually a commercial mistake as much as a creative one) but this is particularly iniquitous in Britain because of the TV Licence Fee, a form of poll tax levied on UK households if they want to watch any live television broadcasts, whether supplied by the BBC or another network. This makes the British viewing public the primary investor in the BBC itself; therefore to treat them as gullible punters who you can fleece of a tenner for a crap plastic toy is really unforgivable.

The one glimmer of intelligence in the whole sorry spectacle may be the message in a bottle Mark Gatiss planted, presumably after seeing exactly what the committee had cooked up to emerge from the magic cabinet – er, DNA replicator thingy: “We're talking about a totally outrageous paradigm.” Hmm, I know I’ve heard those words before...

Well here, for a generation who may never know, is an example of how single-minded the Daleks really were. “Every problem has a solution.” Yep, except the problem of the BBC committee.

SUSAN: Can't we stop them? Can't we do anything?
DOCTOR: Just a moment! I haven't told you how we came to this planet.
DALEK: It does not matter now.
DOCTOR: But…but it does! I have a ship capable of crossing the barriers of space and time. Surely this would be invaluable to you?
DALEK: A ship? What do you mean?
DOCTOR: A machine.
DALEK: I do not believe you.
DOCTOR: But I have!
SUSAN: It's true! We have!
DALEK: You are not capable of creating such a machine.
DOCTOR: You took a part of my ship away from one of my companions - the young man.
DALEK: What did it look like?
DOCTOR: A small rod with metal at either end. It belongs to my ship. A fluid link containing mercury. Examine it for yourselves. You will see it's part of a complicated machine.
DALEK: Yes, I have it here.
DOCTOR: Well, let me show you the ship, explain it to you, help you to build another.
DALEK: A bargain for your lives?
DOCTOR: Yes.
DALEK: Where is this machine?
DOCTOR: In the petrified forest outside the city.
DALEK: Good. When the neutron operation has been completed, we will find a way to travel outside the city limits.
DOCTOR: No!
FIRST DALEK: We will examine your machine.
DOCTOR: No! Not unless you stop what you're doing. Otherwise, I won't explain its secrets to you and its philosophy of movement.
DALEK: Now that we know of the machine, we can examine it for ourselves.
DOCTOR: But you can't operate it without me!
DALEK: Every problem has a solution. 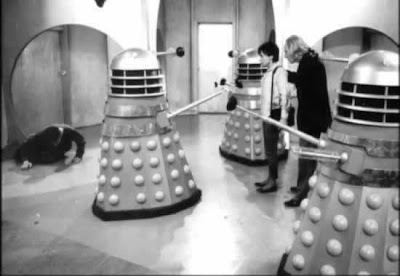