While there's music and moonlight 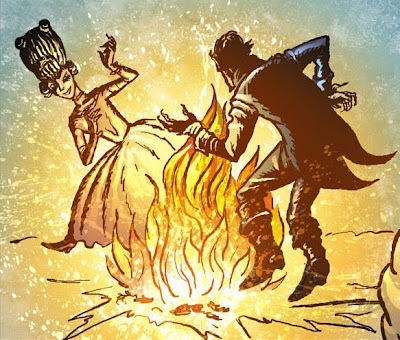 Not wanting to jinx it, but things are looking distinctly brighter for Mirabilis this weekend than they turned out to be for the Weinsteins and Miramax (see last post).

We have spent the last three months negotiating a release from the old DFC contract that will free up the Mirabilis rights. And at last that is looking like it’s about to happen, thanks to the heroic efforts of our agent Stephanie Thwaites and the personal intervention of Random House Children’s CEO Philippa Dickinson.

Getting back our rights will allow me, Leo, Nikos and Martin to complete the Winter book and get on with the rest of the series. We’ll also be able to go looking for publishers in various territories who really love Mirabilis and will want to get behind it. The size of the publisher isn’t all that important – it’s their passion and commitment we’ll be looking for. For example, look at comments by Tim Jones here and Alistair Spalding here that show their enthusiasm for Garen Ewing’s brilliant Rainbow Orchid series (next book out July 5th). Leo and I fantasize about finding Mirabilis a home like that.

You diehards won’t have to wait, though. We’ve got 200 pages almost complete and we plan to release those in a limited collector’s edition right away. We’re also iPad junkies, and you can expect to see a version in the App Store alongside Leo’s charming Sweet Pea series. (My wife thinks Sweet Pea looks like an infant Estelle. Close, except Estelle at five years old would probably be building a formicarium in her wardrobe instead of deciding what to wear!)

On top of that, what I’d really like is to get Mirabilis out in comic book form. Book One neatly slices into eight 25-page instalments. I’m not sure yet how Mirabilis: The Comic #1-#8 would dovetail with an iPad or print collector’s edition, much less what the eventual publisher would think about it. But a tiny part of the story was originally serialized in Random House’s weekly DFC comic two years ago, and that didn’t hurt – in fact, netted us several thousand blog hits.

And you know I mocked up those “Mirus Comics” covers a while back? Those might soon be a reality. My ten-year-old self is going to be ecstatic.
Posted by Dave Morris on Saturday, May 29, 2010