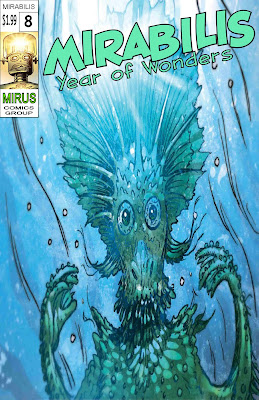 More cryptic hints today, but I can give you some solid clues now. We've been working on the first eight comic covers (you can see them over on the Mirabilis website) and a lot of our tears and sweat have gone into converting from the A4 format imposed by the original DFC serialization of episodes 1-10. The all-new comic book issues use a format ratio nearer to 4:3 - and that's your first clue.

It could have been worse, incidentally. The original specification for The DFC insisted the comic was going to be in Berliner format, which is about 18.5 by 12.5 inches. That's the same size as newspapers like Le Monde, which would have been an absolute distaster for serious story-based comics (as distinct from the funny pages) and could never have been turned into viable trade paperbacks. Luckily all we had to do this week was wrestle everything down from A4, a ghastly enough page size for comics but not an unmitigated disaster.

The other clue is that there's no title text on these covers, unlike the ones we ran off at Christmas. But why, you ask? Well, that's why we call it a clue. More details, with a bit less of the enigmatics and some firm dates, figures and schedules, to come very shortly.

By the way, be sure to check out the new flipbook episode because it's now the whole of the first issue complete with letters page. This is the new look of Mirabilis. A lot is going to be happening around here in the next six weeks and you won't want to miss any of it.
Posted by Dave Morris on Monday, July 19, 2010