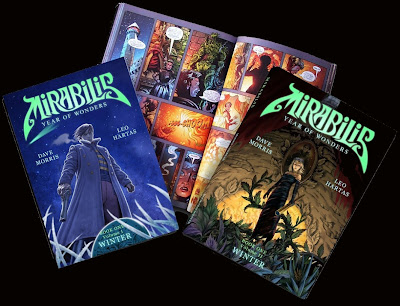 And, as promised, here it is (just) in time for Christmas: the trade paperback edition of Mirabilis: Winter. The first book was so long that we had to split it into two 112-page volumes that between them collect the entire first season. The perfect stocking filler if you have two oblong stockings measuring 7" x 10" - which, by the way, is a little bit bigger and more deluxe than regular tp format. The production is very nice, with sharp colors on good quality paper stock with a silky finish. If you're used to the glossy, highly reflective pages of something like Buffy or Hellboy, it's nothing like that. It's more of a matt feel, but on somewhat better grade of paper than a typical comic book. All in all, a pretty classy item if I do have to say it myself.

Join Jack and Estelle on a sweeping adventure across Europe from London to Istanbul. On the way you'll meet mind-controlling cabbages, bottled witches, babies thirty storeys tall, saints in plate armour, genie caretakers, Shakespeare-loving vampires, airships, magicians, demon kings, mad horticulturists, chess-playing robots, crime-fighting apes, sinister plans and debonair derring-do. And we're still just in the first month of the Year of Wonders! There's duelling, love, betrayal and leaps of faith and trust, all wrapped in elegant Edwardian style with a dash of English fantasy. It's the ideal family entertainment, and if you can think of a better way to spend a couple of hours after the turkey and crackers, I'd like to hear it.

If you're in the USA, here's where to order Volume One on Amazon, and you can also get it on Barnes & Noble. Only $19.99. Canadian comics fans can get Volume One on Amazon Canada for the ridiculously low price of $14.75 - a whopping 27% discount. That's because there's a green comet in the sky, hence lots of miracles like that coming up.

European readers can get the books for around 15.99 euros in France, in Germany and they should be available in Spain, Italy and other territories too, as well as Australia by the middle of next year. I'll let you know the links when I have them - and also the links for Volume Two, which should be published in the next couple of days. (Incidentally, don't be put off if Amazon's product info says the books are not available. They are printed to order, so as soon as you buy, a personal copy will roll off the presses and be sent to you.)

British readers can get Volume One right now for £12.99. (Again, ignore what it says about unavailability; Amazon will ship within days, and they don't bill you till they ship anyway.) However, as soon as the contract for the UK hardback editions is signed, be warned that we'll be pulling the Amazon.co.uk trade paperbacks - so you Brits, if you can stand waiting another few months, you might want to hold out for those beautiful big hardback editions. Or buy both - we won't complain.
Posted by Dave Morris on Friday, December 10, 2010